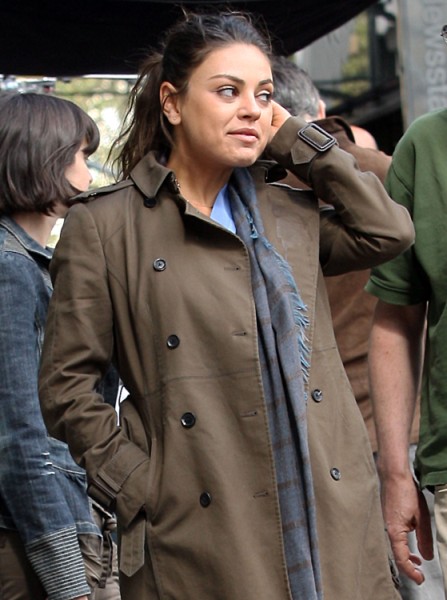 Can I start this post by saying that Mila Kunis should be begging Miley Cyrus to steal Ashton Kutcher away? Sorry, I jumped the gun. Let’s start over. Apparently Mila started “setting some ground rules” when she found out Miley was going to co-star with Ashton on Two and a Half Men for a couple episodes. What’s more shocking so far – the fact that Miley’s actually working or that Mila’s jealous of her?

Ya, because Ashton seems like he takes ultimatums so well. So just in case, Mila has threatened to “[make] regular drop-in visits to the set to make sure he and Miley are on their best professional behavior.”

This story has perfect timing. Before yesterday, I would have brushed this off but, after seeing those pics of Mila and Ashton making out in NYC, I’m more willing to believe some of it. What happened to Mila? What did Ashton do to this poor girl to turn her into this sniveling, attention-seeking, self-conscious girlfriend? For a moment there I thought I was describing Miley. I might as well have been. Is that what Mila has become? Even with her Oscar nod and hectic schedule, is she really another Miley going crazy over her boyfriend? I won’t go there. I can’t. I have too much respect for smart women.

Mila should be worried but not about Miley. Miley has Liam Hemsworth and Liam is greater than Ashton, both in looks and career. She actually picked a good one. Say what you want about Miley but she’s not slummin’ like Mila. Nope, if Mila has anyone to worry about it’s Ashton. I’m telling you… look at those pics again. That relationship is not equal. You add that along with the fact that her career is so much better than his and well… you don’t get good results. I’m not saying some men can’t handle women more successful than they are. I’m just saying Ashton probably isn’t one of them.

Do you think Mila has anything to worry about?