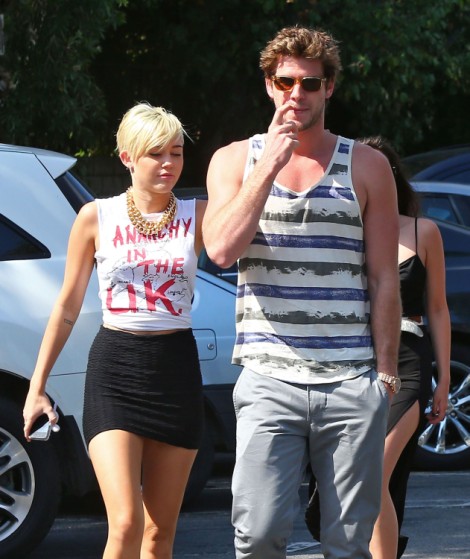 Apparently Miley Cyrus has a kissing scene in Two and a Half Men so she’s been doing the promotional circuit like an Oscar nominee. She was just on Ryan Seacrest’s radio show and pretty much threw her fiance, Liam Hemsworth, under the bus for the fact that she can’t find decent movie work and spends most of her time tweeting pics of herself with no pants on in various degrees of hair cuts.

While On Air with Ryan Seacrest, Miley discussed jealousy issues encountered while they work away from each other. “It’s a thing, but it’s not a thing,” she said. “At this point we’re engaged, like we’re forever. I think if I was a girlfriend and all this stuff would happen I would feel like I need to show my ownership. I’ve turned down scripts, because I felt like it was things that not only make me feel uncomfortable, but I don’t think any career is worth stressing out the person that you love the most or making them feel hurt. So, we both give each other boundaries.”

Stop talking shit Miley Cyrus! Don’t act like you’re in a position to be too choosy about scripts. And I know you’re young and have a boatload of insecurities but I hope you don’t give Liam too many “boudaries“. Homeboy is doing well right now with five movies coming out in the next year or so. Holding him back because of petty jealousies would just be stupid and I’d like to think he’d think the same about her. If he doesn’t mind the fact that she either flashes her ass or her belly to every paparazzi in LA every other day then why would he mind kissing/sex scenes in a movie? I’m sorry. I don’t know why this annoys me so much. Maybe it’s because Miley wants to be taken seriously as an actress so badly but she isn’t willing to do the work. She isn’t willing to distance the personal with the professional. She likes being a celebrity. Liam really doesn’t. I don’t know if this relationship will last. I have  my doubts but don’t want to be a total bitch about it. Regardless, for his sake, I hope his career makes it out alive.

In her comment, did it sound like a Miley Cyrus blames Liam for her less than stellar track record post- Hannah Montana? Are boundaries smart for a couple so young?