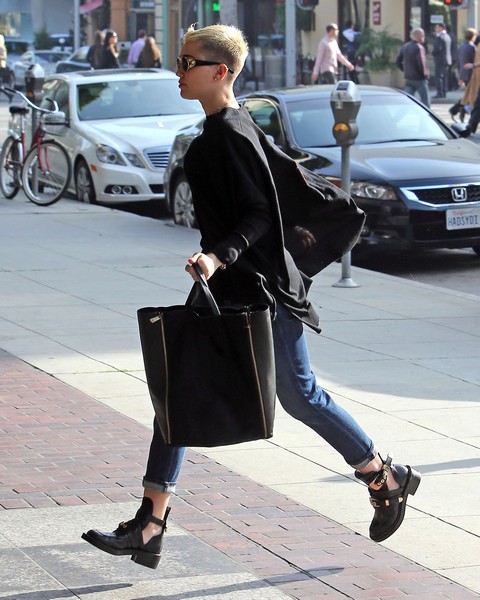 Miley Cyrus once sang that she couldn’t be tamed and neither can her breasts. The former Disney Princess who ruled the teen world long before Taylor Swift blurred the lines between fashion and flop by going braless over the weekend at a concert. She was just being Miley, of course, the 2.0 version that shocks the world into paying attention to her.

Ever since the end of Hannah Montana, Miley has done a 180 from her cookie cutter image which built the foundation of her billionaire dollar brand. Even in the waning days of her peak, the 20 year old was already distancing herself from the goody goody character which made her an even bigger star than her father, Billy Ray Cyrus. At one point, it broke Billy’s Achy breaky heart to see Miley going off the rails as her hemlines got shorter, the boyfriends older, underage drinking, penis shaped cakes and a proud love of weed. Miley could be forgiven for the last part since “420” is a day of celebration but Miley’s threshold into adulthood has caused more panic with each act of defiance.

It’s not as if Miley didn’t give everyone ample heads up that she’d be pulling out all the stops when she posed backless at 15 and later danced on a pole at a teen award’s show. Still, the general public hasn’t braced itself for Miley bearing her tata’s and gyrating across stages. But, that’s just who she is now. This is who Miley has been for a while now and eyes have to accept the truth.

Miley is no longer the little girl with flowing long hair and a country twang. The accent is still there, but she buzzed off all her hair, got multiple tats and regularly wears revealing clothes. It was only a matter of time before her sweet niblets got their close up.