Miley Cyrus Cheating On Liam Hemsworth One Week After Engagement? 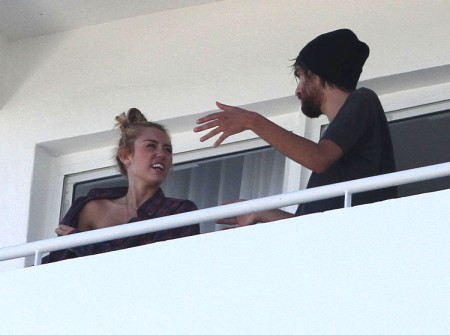 Miley Cyrus looks likes she’s already cheating on Liam Hemsworth because she spent the afternoon in the cozy company of a mystery man and things appeared too close for comfort.

While sipping on what appeared to be a cocktail, Miley and the dude (who, again, was NOT Liam) giggled and stared into each other’s eyes at a Miami pool. He also spent time staring at her bulging boobs. You don’t believe me? Check the pics out at the Daily Mail. Now, I’ve got a pretty cool husband and he understands I have guy friends but he would flip his shit if he saw me giggling that close to a guy I wasn’t related to. And if I was giggling that close to a guy I was related too that would be weird.

Did you see the Punk’d Miley played on Liam with the naked people locked in the car? Ya, Liam doesn’t seem like he has the coolest head.  Didn’t she say he loses his temper easily? I can’t imagine him looking at these photos and seeing sunshines and rainbows because this looks bad, doesn’t it? It looks like mystery guy is touching her legs in a couple of the pics. After the indecent pool party, the pair smoked some cigarettes on the balcony of her room. I hope she was wearing a tube top because I don’t see a bikini and her shirt is way too open for my taste.

Now, let’s play devil’s advocate. She’s wearing her engagement ring so that should comfort Liam (I guess). And apparently she spends $25,000 a year to fly her trainer all over the world so she can keep that pilates-crazed body. So it could be him. But do you ever swim that close to your trainer? Where’s the personal space? Where’s the respect for your fiance?

This could just be an immaturity thing which is why 19-year-olds should not get engaged in the first place. Miley is young and hot and flirtatious and probably doesn’t understand that when you pledge to be with someone for the rest of your life, shit like this can’t happen. Even if Liam laughs it off (which I don’t see how he can) she needs to realize she is officially off the market.

Take a look at the pics. Would you want your significant other looking at someone else that way? Is this just innocent flirting or is Miley skating dangerously close to a broken heart and a broken engagement?