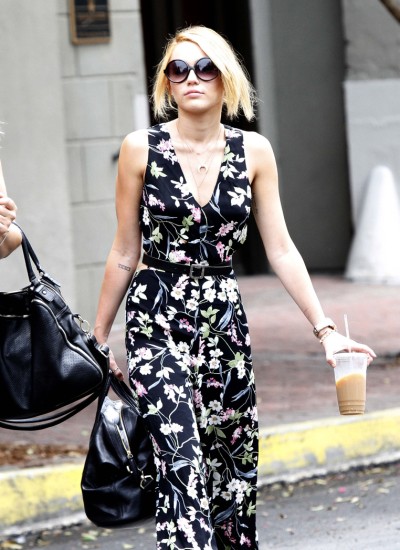 It figures that while the whole world would be talking about Miley Cyrus’s engagement to Liam Hemsworth, her brother Trace Cyrus would call her out for her dirty, alleged cutting habits.

Miley thinks shitty brother. A source told HollywoodLife.com that Miley is “frustrated” by her brother’s message since she has been singled out for disturbing scars on her wrist in the past. Naturally, Miley denied the allegations but she’s pissed that Trace put “unneeded focus” on the old news. Of course she is! Screw mental health, she’s got a wedding to plan y’all!

“If he removes it, then it will focus even more attention on it,” the source pointed out. “That’s the last thing Miley wants to happen.”

As of today, Trace hasn’t removed the tweet and it was pointed out by one of his followers that it is the lyrics to a Mac Miller song, so I can try to give him the benefit of the doubt, but it’s just too coincidental. If my family member was a cutter, or had been labeled one in the media, I wouldn’t tweet about cutting!

Is Trace jealous of his sister’s happiness and lashing out by pointing out her hypocrisy? Trace just broke up with Brenda Song and he might have a case of the grumpies. But WTF? You’re her brother, dude! If you want to help her, then help her, don’t go flashing her dirty laundry all over twitter! Where’s the sibling loyalty? Oh wait, sorry, this is Hollywood, it doesn’t exist.

Do you think Trace’s tweet was just a coincidence or is he backhanding Miley with some leading compliments?