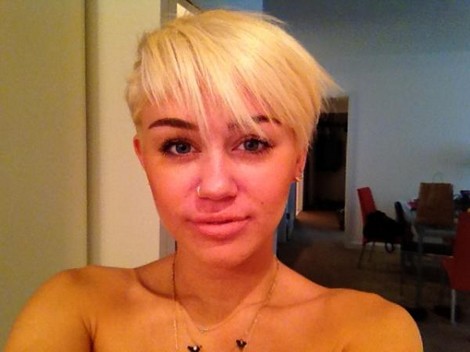 What’s not to like about Miley Cyrus new hairdo?  She looks like the next punk fashionista, a platinum wonder, and like she just kissed a boy.  Miley keeps making these fashion statements that could be interpreted as a need for attention, or a fantasy to be someone other than who she is perceived to be.

She has millions of adoring tweens who look up to her as a role model, but she has fought against that image in favor of a more daring one to the chagrin of many of the parents of her young fans.  Recently, Miley tweeted pictures of herself in barely there sheer clothing, and yes may I remind you she is engaged to be married.

These fashion statements could be an exploration to walk on the wild side before getting hitched, or possibly that she is not sure she wants to be married.  Of course it is also possible that growing up in modern Hollywood Miley does not associate any degree of modesty of fidelity with marriage!

Miley only has the most doting, handsome and in demand boyfriend in Tinseltown, Liam Hemsworth.  No doubt Miley has figured out that it is the squeaky wheel that gets the grease. Perhaps all of these fashion statements, along with her new super-fit body courtesy of her diet and exercise obsession, are just a PR move on her part to stay in the limelight and thus stay relevant.  Share your thoughts on Miley’s new look.  Do you feel that perhaps Liam need to look twice before he leaps or should he hit the pause button and give the relationship time, lots of time?

Some snaps from Twitter – Miley has a nice little business going on Twitter – if you check out her account you’ll be sure to notice all the well-remunerated product placement.  Many celebs earn a significant portion of the income from selling Twitter spots on their accounts to advertisers and promoters – just so you know.  Lady Gaga is reported to earn $30 million/year from Twitter!  In case you thought that these celebs just loved you and wanted you to be a part of their lives… THEY DON’T!!