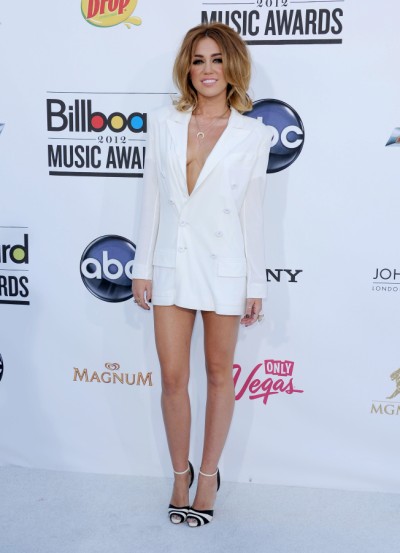 Was Miley Cyrus naked under her blazer last night? The Disney queen tried REALLY hard to stand out at the Billboard Music Awards wearing little else besides a white blazer and Beetlejuice-inspired heels. Yes, the blazer was Jean Paul Gaultier and the heels were Christian Louboutin but  does that make this look any less… desperate?

I actually don’t mind the cleavage and the legs. This was a music awards show and she is a rocker (I guess) but the suit makes her look like she just stepped out from shooting Dick Tracy 2.

I give her props for trying to be fashion forward and hold her own at an event she probably had no business being at since she’s not promoting a movie or an album but when it looks like your John threw his coat on you and hurried you out of the house because his wife just walked through the front door, something’s not right. She had “I just got laid” hair too, don’t you think?

I get the sex kitten look she’s aiming for and some of you might like it. I’m just not a fan of men’s suits on women, especially those sans pants. I think Halle Berry is the only person who can pull it off for me because lord knows Celine Dion didn’t when she Kris Krossed it at the Oscars in 2004. But at least she was wearing pants! Did I mention Miley wasn’t wearing pants or a bra?? Oh, to have a 19-year-old’s fake boobs!

And I’m sure all you anorexic-theorists out there are having a field day saying she wore the coat to get people’s minds off her eating disorder since anorexics wear baggy clothes so people will never know how thin they are. I can’t go there. First off, I don’t think Miley has an eating disorder AND I actually think Miley thought this outfit was hot and would get her attention which is always more important. She does have great legs.

I just don’t know. It’s not a fashion disaster but it doesn’t do anything for me. What do you think, am I overreacting or does she look cool and age appropriate?