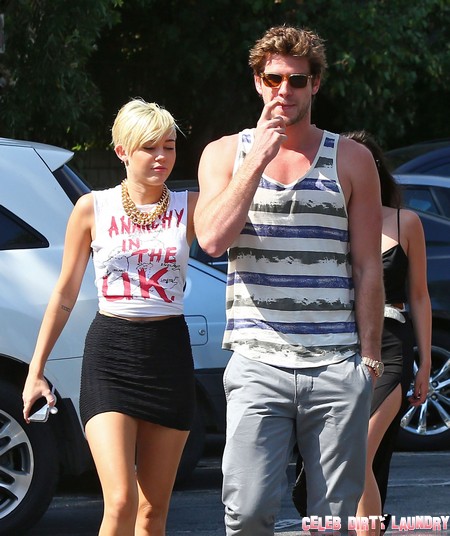 Miley Cyrus and Liam Hemsworth were spotted out for the first time since World War Twitter and as usual, the photographers were there to capture every moment of the outing. In the photo, the androgynous looking Miley clings to Liam like Demi Moore clings to her sanity. There were rumours of an “extreme” side-boob, “one sided PDA” and a “scandalous” outfit, but according to Hope Carson at Celebs Gather, it was hardly that scandalous.

We agree, there’s nothing about this image that’s sending us running for the hills and breaking typewriters with our teeth, except maybe the cellulite on her upper thighs? Allegedly, Miley and Liam got into a bit of a spat after her typical ‘Miley Cyrus Twitter’ mess caused by her sharing of scandalous images, so this was the alleged reason why Miley and Liam became super lovey dovey all of a sudden. In the photo, Miley exudes an aura of “I-am-wif-me-man-mmkay?” as she sucks onto his large upper arm like a drunken and insecure amoeba. A picture speaks a thousand words, but this one merely muttered “Blah.”

Hope talks rather humorously about the alleged side boob in her article, “As for her ‘trademark sideboob,’ it was extremely tame. In fact, it wasn’t so much side boob as plain old side. There’s no visible swelling or protrusion. Actually, it could double as her shoulder or back. (Sorry, Miley.)” Yeah, what’s up with that tiny little pinprick boob?

The engaged Miley chopped off her famous hazel locks in favour of a peroxide boy cut, which suits her in theory, but comes across as a bit too Justin Bieber-eating-Roxette-albums in practice. The actress is infamous for her Twitter sharing and fan involvement. While we’re able to respect this celebrity methodolgy, we still think Miley is way in over her head (literally).

Do you think Miley was trying to be all over Liam? Do you think she was being “scandalous”? Let us know in the comments below.