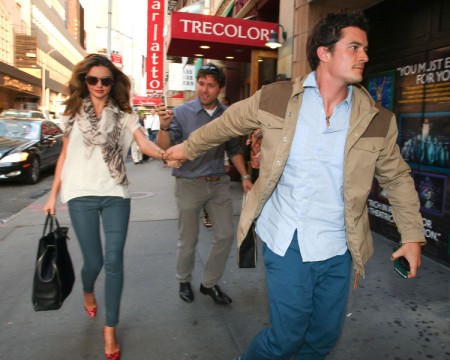 Cherubic beauties Miranda Bloom and Miranda Kerr are putting the break up rumors in overdrive as they have both been seen out and about without the everlasting symbol of their love firmly entrenched on their ring fingers.

It seems the couple that was married in 2010 has been spotted sans wedding rings and, although their shaky marriage might be news to me, apparently it isn’t to friends of the pair. According to The Sun, a  source told Famous magazine the relationship “might be in trouble” and added, “She’s not wearing her ring, and she’s had a lot on her plate – it could be that somewhere along the way her relationship with Orlando may have slipped between the cracks.”

I thought long and hard over whether people would even care about this news to begin with. Orlando isn’t exactly the big draw he used to be. It’s astonishing to me how a guy who started off so strongly with his Lord of the Rings trilogy and Pirates of the Caribbean franchise could fall so far in his career. Should we blame Cameron Crowe? Elizabethtown was sort of the beginning of the end. Just look how long it took Kirsten Dunst to bounce back! She’s only now recovering from that movie!

On the flip side, Miranda Kerr is as hot as she can be – both literally and figuratively. The Victoria’s Secret model is one of Australia’s highest-profile beauties and has recently suggested she wants to start a singing career. She makes bank – maybe more than Orlando. And that matters to some dudes although I can’t imagine why.

I hardly ever see those two together anymore. Their schedules keep them busy and a part a lot. Miranda’s always good for a photo-op in NYC with baby Flynn but Orlando has been jetting back and forth from New Zealand where he’s been shooting The Hobbit (if anyone needs that movie, he does).

So maybe the alone time is sparking the rumors. I’m not a ring conspiracy theorist because I barely wear my wedding ring. I’m not a jewelry person so I don’t notice it but I know people who clean the house with their ring and even take showers with it on. That always seems so extreme to me. If my husband needs me to keep his symbol of our love close to my heart while I’m scrubbing the toilets than we’ve got more important problems. However, I know some of you out there like to wear it every day, all day. No judging, to each her own.

Do you think the ring is truly a sign that Miranda and Orlando split up or is this just the media looking for a new celebrity break up story now that Katie Holmes and Tom Cruise’s drama is simmering down?