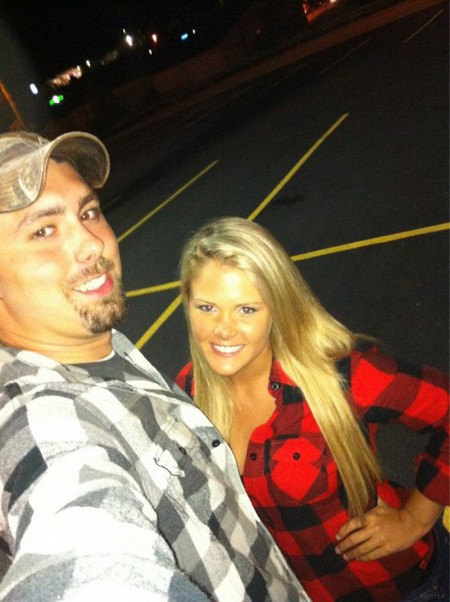 Her name is Miranda Patterson. She also graduated from Point Pleasant high school. Her previous job was at Pacific Sunwear. Corey sent Miranda a direct message on Twitter giving her his phone number and tweeted he hoped he would hear from her. He did – he then tweeted he was happy and excited about their upcoming date.

Before the date Corey sent out a tweet saying he was nervous. Everything must have went great and prefect followed by smileys. Miranda then tweeted no that’s you with Smileys. She also tweeted oh how I would marry Corey Simms.

Corey said this is the happiest he’s been in a long time. The two took several pictures together you could tell Corey was blushing they both looked happy. Miranda said it was a long time since she wore a smile this big. She also tweeted what a lucky girl she was and Corey chimed back in saying hea the lucky one.

Corey put a neon green sticker in his truck that said ‘CTS + MBP 6/13/2012’ guess that’s the date they made it official. Her birthday is coming up on June 20 im sure Corey will have something special planned.

Corey deserves to be happy he’s had to struggle with one of his twin daughters being sick. He also went through a divorce that was in the public eye with Leah Messer the mother of his twin daughters. I just hope Corey doesn’t do anything bad it would be awful to get handcuffed and thrown in jail by your girlfriend. Unless you like that sort of thing…