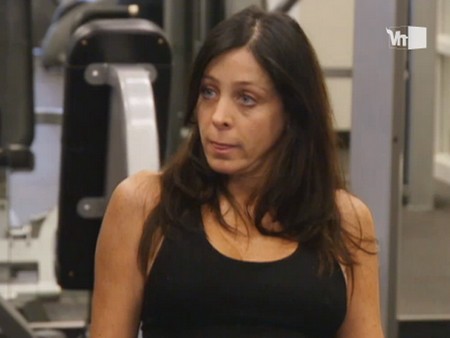 Tonight on VH1 a whole new episode of Mob Wives of Chicago airs. On tonight’s show in the past Renee has criticized Pia for being a stripper, however, we find out tonight Renee’s lifelong friend Nora used to work the pole herself. “It makes no f—in’ sense to me,” Pia tells Nora about the situation.

If you have never watched the show here are the cast members and what they have to say about themselves: Renee Fecarotta Russo: “People say I’m a judgmental bitch, but I’m about class, respect and loyalty.” Nora Schweihs: “Do you want me to stab you now, or do you want me to stab you later?”  Pia Rizza: “Everybody I know goes to jail.”   Christina Scoleri: “I may be a nice girl … but there’s a bitch in here if you bring her out.” Leah Desimone: “People call me a chubby chaser … I like ’em fat and round.”

On tonight’s show Pia and Nora are now united in their mutual hatred of Renee, though Nora’s obsession with Renee is starting to wear on Pia. Christina shares her anguish over her divorce with Leah, who is emotionally undone by news of her mother’s battle with breast cancer. Meanwhile, Renee’s adult daughter, Giana struggles with her mother’s offer to go with her to visit her father in prison.

Nora celebrates her birthday by inviting everyone, but Renee to go-kart racing. Nora’s continued rants about Renee push Pia to lose her patience and reveal a secret about Nora that threatens to end their friendship forever.

So Renee has been being nasty to Pia about being a stripper and then Pia finds out Renee’s best bud was one too.  Pia does not understand how that makes sense and she tells as much to Nora.  But Nora defends herself saying that when Pia works, she goes the extra mile for her clients, and that’s the difference. “I mean, five hours upstairs in the VIP room…They’re not dancing, okay?”  Nora explains. That’s quite an allegation!

Tonight is going to be another drama filled episode that you won’t want to miss, so be sure to tune in for our live coverage of VH1 ‘Mob Wives of Chicago’ tonight at 8PM EST!  Meanwhile, while you wait for our recap hit the comments and let us know what you think of the premiere season of “Mob Wives of Chicago” so far!  Check out the sneak peek video of tonight’s show below!

Tonight’s recap: Tonight’s episode begins with Pia Rizza and Nora Schweihs sitting down to discuss Nora’s fight with Renee Fecarotta Russo    Nora claims she tries to carry herself like a woman who has respect for others and is classy. Um, okay, if she says so.  Meanwhile Leah DeSimone is having coffee with her mom, Jackie, who was recently diagnosed with breast cancer.  She says the journey will feel endless, but they will beat the cancer together.

Rene went to school for fashion design and that explains why she is in a fabric store with Christine Scoleri talking while randomly touching bolts of material.  She tells Christine about her bar fight with Nora and Christine is kind of unhappy that their talk turned to a fight.  She also worried because Nora is burning her bridges with all of the, ladies.

Nora calls Pia over again to discuss Renee and Pia goes completely bonkers on her screaming and yelling that she is sick of hearing about Renee. She tells her to get over it because this topic is ruining their friendship.

Christina pays a visit to her shrink and discusses her biggest family problem.  Christina and her husband are divorced, but live together and their daughter had no clue- until her neighbor told her. The shrink tells her to expect there to be trust issues now.  Her daughter is obviously hurt because neither parent told the truth.

Nora decides she wants to do something fun and invites all the girls for a party bus trip to an “undisclosed location”.  That raises eyebrows with Christina who asks flat out if she’s going to be whacked.  I’m kind of half convinced that Leah used to be a dude and half hides it under that crazy curly hair.  Maybe it’s the gruff voice and the way she holds her cigarette while drinking her Starbucks coffee, not sure, but I’m suspicious.

Nora is excited for her birthday party and the girls sit on the party bus debating whether or not men should buy them things. As usual the conversation gets just a little heated.  These women can’t talk without someone getting fired up.  They soon realize that this party bus is taking them to race go carts.  Not exactly a dream excursion for most of them.  Pia isn’t driving because she simply won’t risk anything happening to her new boobs.  She thinks Nora is “two bologna sandwiches short of a picnic” to take them go carting.

Party bus ride home gets ugly when Nora starts ranting again about Rene which makes Pia interrupt her in a failed attempt to quiet her.

Christina invites Renee over to her house to check out the dress she has designed for her.  They sit down to discuss Nora.  Christina is having a party in a week and she is trying to feel out whether or not she can invite both Renee and Nora.  Meanwhile Nora is at the gym with Pia discussing the same thing.  Nora has no intentions of setting foot in the door of Christina’s apartment.  Nora and Pia get into an all out brawl over this topic.  Seriously, every simple talk leads to an altercation!  Pia starts spilling Nora’s secret, mainly the one about how Nora was a stripper!  Tune in next week to see how this fight ends!