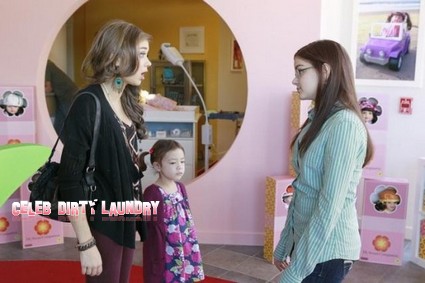 Tonight is a whole new episode of ABC’s Modern Family and it is called ‘’Guns and Dolls’   Stand by, we will be live blogging the show at 9PM tonight with all the up-to-the-minute details.   I absolutely love this show, the chemistry between the actors is what keeps me coming back, what about you?

On tonight’s show it’s a day of disturbing realizations when Mitchell manages to ruin one of Jay’s proudest golf moments, Phil overhears something that may forever change how he sees his little girl, and Gloria stumbles upon Claire’s dangerous little secret.

We will be live blogging tonight’s episode with all the up-to-the-minute details.   So come back at 8PM EST and spend the evening with us.  Make sure to refresh often to get the latest updates!

TONIGHT’S RECAP: The family is all having dinner together and the children are getting a little jealous of all the attention on Lilly and are convinced they have to take her down. Mitch tells Jay that a long time ago when he got a hole in one, it really wasn’t, he kicked the ball in. Jay is upset and leaves the table, his friends call him Ace for that hole in one. Manny and Luke are up to no good, they set up a trap for Lilly, but Cameron falls prey and slips on the floor. Phil doesn’t see that the boys are responsible and blames himself for Cameron’s fall.

Phil is in the van with Haley and Alex, Lilly is between them. Phil tells them he is taking them to the food court. Haley complains he accidently calls her a virgin, meaning she has never been there before.

Cameron is all alone, Mitchell comes in and starts talking about the hole in one. Cameron convinces him to go to the club and see Jay to make up.

Claire arrives at yoga and Gloria is there and surprises her, Claire fakes a headache and heads home. Meanwhile, Manny and Luke catch Cameron up and around, they see that he is better and he bribes them with $20 if they wash his car. At the club, the guys are joking around with Jay about his nickname Ace. Jay was going to come clean on his hole in one, but decides against it.

Mitchell walks in and spills the beans, he tells the guys that it is not Jay’s fault that he thought he had the hole in one.
Phil is with Haley at the doll shop to get a Beatrice the doll repaired and what he really wants to speak to her about the “virgin’ word, but instead he hugs her and says he tryst her.

Meanwhile, Manny and Luke have taken Cameron’s car on a joy ride, past Miranda’s house so Manny could impress her.

Gloria catches Claire going back to yoga and asks her why she doesn’t want to spend time with her. Claire tells Gloria the truth, she doesn’t go to yoga, she goes to a shooting range. Gloria goes in with her and loves it.

[9:32:55 PM] Rosie LeBlanc: Jay is having a drink with Mitchell and they talk about the hole in one. Mitchell apologizes and Jay has a hard time getting over it. They start talking about that day and Mitchell is surprised that Jay can remember all the small details.

Manny and Luke consider themselves bad guys now that they had their little drive in the car and showed off in front of Miranda, Manny says they can forget about Lilly now cause they are bad guys.

Claire arrives home, Cameron has fallen again, this time in the kitchen when he was trying to climb on the counter.

That’s it for this week, how did you enjoy the show?