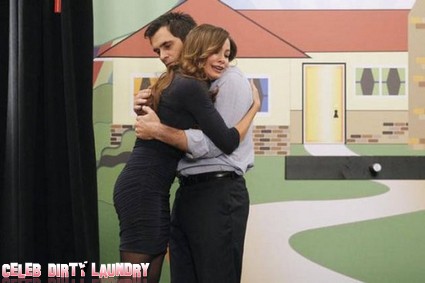 Tonight on ABC there is a whole new episode of the mockumentary Modern Family.  Stand by because we will be live blogging the show with all the up-to-the-minute details. It is the twelve episode of the third season and it is called ‘Egg Drop.’  Last week Phil developed a case of hypochondriasis, Cam tried to undercut Mitchell’s professional accomplishments and Luke hung with his old-man friend. If you missed the episode ou can read a recap here!

This week’s episode synopsis: Luke and Manny have a big school project to design the best capsule that would protect an egg in a two-story drop, but when Claire and Jay catch wind of it, their own competitive drives kick in… and eventually take over. Meanwhile, Phil solicits the help of Haley and Gloria to sit as plants in the audience during a huge real estate presentation he has put together, and Mitch and Cam meet with prospective birth mothers and must try their very best to be charming and likeable, on “Modern Family,” WEDNESDAY, JANUARY 11 (9:00-9:31 p.m., ET), on the ABC Television Network.

This weeks episode features ‘live’ plants, birth mother meetings and egg dropping.  What are you excited for in the upcoming episode?  It really does not matter which Modern Family you love – there is always something for everyone.

Come back to this spot at 9PM EST when we will be live blogging the episode with all the up-to-the-minute details.  Make sure to refresh often so you don’t miss anything!

In the meantime while you wait for the recap, you an see a sneak peek video of tonight’s episode here!

Phil tries to include the family in his seminar, but nobody is interested. Luke makes a capsule that would protect raw eggs, drops it from the stair case and Claire slips on it. Meanwhile, Jay can’t believe that Gloria always yells at her family, but she claims it is because she loves them. Manny is also trying to work on an egg project and tells Gloria that Luke’s is going to be better because he is going to have help.

Jay calls Clare and says it would not be fair if anyone would help Luke. Phil still needs help with the seminar and when Claire refuses to go with him (she wants to help Luke with the project) he calls Gloria to help him and Jay believes he did it so Manny wouldn’t get any help from her for his project.

Mitchell and Cameron are meeting with perspective birth mothers when Cameron gets upset because Mitchell is asking too many questions and being too picky.

Jay is at his seminar with Gloria and he tests out his speech on her.

Mitchell’s patience is really getting short of patience, the birth mother is driving him crazy.

Jay goes over to see Claire to borrow a screw drive for Manny’s project and claims Luke’s project is already done, but Jay finds lots of raw eggs on the floor.

Mitch and Cam break out in a song for the birth mother, she wants to hear them sing because the baby’s father is a musican and wants to be convinced that they baby will be brought up in a musical family.

Gloria and Haley left Phil for some pampering and when they come out of the salon, the car is gone, Gloria parked in a no parking zone. Meanwhile, Phil is bombing at the seminar.

Claire tries to bribe Alex to buy her similar project that she did while she was in school, she is getting desperate.

Mitch and Cam are excited, the birth mother tells them that she is picking them. The guys are so excited that Cameron starts singing a sad song, which makes the mother change her mind.

Gloria and Haley finally meet back with Phil and he tells them that he is really disappointed that the two of them were not there, the presentation is ruined. Gloria is upset because Phil is being too nice to her, all of sudden he loses it and starts to yell at her. Gloria is happy that he is letting out his hurt feelings.

Jay and Claire go up one story and drop Manny and Luke’s capsules, the eggs are fine, they both did a good job. Jay and Claire are too much into this, they go up higher to drop it again, when the two boys get upset about it.

The boys fess up with Jay and Claire, they tell them that they were set up because they knew that if they told them both about the project that they would be competitive and try to make the projects on their own.

Haley and Alex are in their bedroom, when Alex things she is having a meaningful conversation with Haley, when Haley is really on her cell phone with a friend.