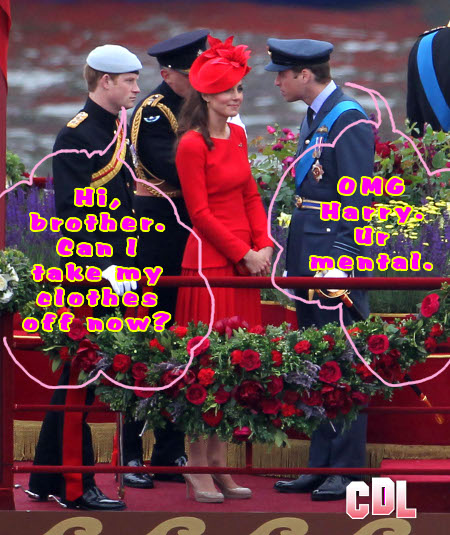 Prince Harry‘s naked rear is probably suffering from third-degree burns by now after all the hot water he’s been getting himself into, and it looks like things are only going to get worse for this royal bloke. By now, everyone has seen the photos of naked Prince Harry partying it up with several girls in his Las Vegas hotel room. But are there more pictures out there? Somewhere in the world, are there a few lads or lasses with a bit more scandal to sell? You bet your naked scandalous rear there is!

Max Clifford, a powerful and extremely prominent publicist in the UK, recently told US Weekly magazine that he’s “been approached by two American girls” who claim to possess more evidence of Harry’s orgy-esque night in Vegas. While the girls contacted Clifford in hopes of being able to sell the snapshots for a pretty royal penny, he assures the magazine that he did not purchase the goods.

A source close to this situation also adds: “There’s more out there. Stories which wont go down well with the Royal family. It could get worse.” Well, it’s sounding like it’s only a matter of time before it gets worse. Those two girls, if they really do have legitimate pics of the crazy-wild royal, won’t have to wait long before they have a buyer.

As of yet, reps for the palace claim they are done commenting on the scandal. I hope they are gearing up for Prince Harry nude scandal version 2.0!