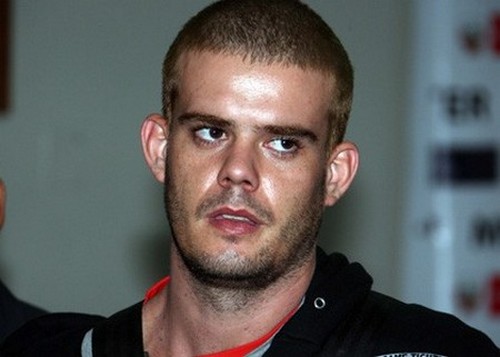 What has this world come to when Joran Van Der Sloot can get a woman pregnant? While he’s serving jail no less for admitting he murdered a Peruvian woman, Stephany Ramirez Flores, in 2010 and is linked to the 2005 disappearance in Aruba of Alabama teenager Natalee Holloway!

The currently incarcerated Van Der Sloot says he knocked up a woman named Leidi during an unsupervised meeting while in jail in Lima, Peru. “A test has proved” indeed that Leidi is in fact in her second trimester the Dutch newspaper De Telegraaf reported Wednesday. Back in 2011 there were reports that a woman named Leydi Figueroa Uceda was Van Der Sloot’s current girlfriend, though she denied the reports. I’d deny those reports too, but I’m not dating a man in prison, nor would I ever stay with someone like that.

Van Der Sloot showed no remorse for his actions for any of the crimes he was linked to and charged with. I can not fathom the idea of how any woman would be willing to be in any kind of relationship with him. Do you even think that this man cares at all that he knocked up his girlfriend and know she has to deal with this for the rest of her life? I don’t see how it will change him in the slightest.

People say that babies are a blessing and a gift. I’m sorry but I don’t see how that can be true in this situation. If this is true than that poor baby is going to have to wait a long 28 years to see their father out of prison (unless he’s granted parole in another 9 years), that’s if they want to see him at all. How can you possibly explain that situation to a child without regret? Not only is their father a convicted murderer but also a sociopath.