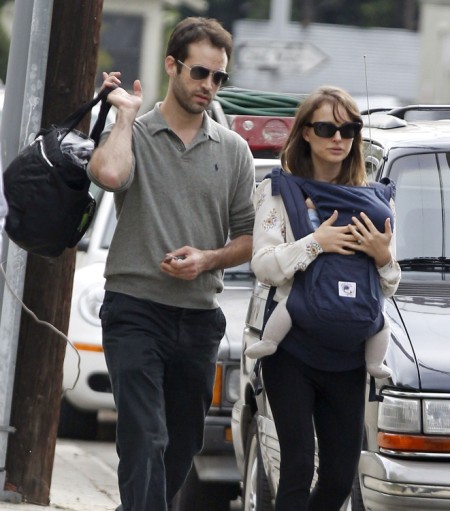 The ever perfect and poised Natalie Portman had trouble controlling her son, Aleph Millepied, during a recent lunch date in L.A. The meat and dairy abstaining Oscar winner was at Flore Vegan but had to jet early because Aleph threw a temper tantrum, totally disrupting all the patrons.

The National Enquirer, print edition, said Natalie tried calming the little tyke but he was all, “DAMN IT WOMAN! I NEED BEEF AND WANT TO WASH IT DOWN WITH SOME WHOLE MILK!”

Natalie, aware that her kid was annoying the hell out of all the vegans who are notoriously grumpy when hungry, asked the waiter for her lunch to go and paid the tabs of the disturbed customers.  “Her fellow diners were grateful, but protested – saying kids cry sometimes and Aleph wasn’t that bothersome,” a source told the Enquirer. “But Natalie, apologizing profusely, insisted on paying their tab of nearly $150, then left them to veg in peace.”

Good for Natalie. See Pattie Mallette? This is how it’s done. There’s nothing worse than a parent who indulges a tantrum. I know I don’t have kids but I’ve been inconvenienced by them and my blood boils when they’re allowed to get away with shit behavior in public. It would have disappointed me if Natalie let Aleph go vegan-hatin’ wild at the restaurant. Natalie is one of my longest crushes. We almost had to break up when she married that ballerina but I forgave her because that’s what best friends do!

Have you ever encountered a celeb indulging his kid? Please dish!