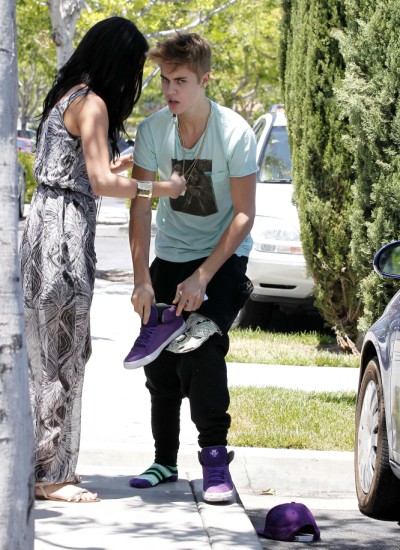 Justin Bieber’s recent angry outbursts against fans and photographers have his mom, Pattie Mallette, fearing her famous son is heading down a path of self destruction. It’s a path Pattie recognizes all too well. It’s the same path of Justin’s father.

The National Enquirer reports Pattie screamed, “You’re just like your father” at her 18-year-old son, after learning he roughed up a pushy photog while out on a date with girlfriend, Serena Gomez, last month. But she didn’t let him off the hook that easy. “Pattie accused Justin of turning into the spitting image of his father – and that’s the last thing in the world she wants,” a family source told the Enquirer. “She told him she won’t tolerate him turning into a ‘violent, arrogant, self-cen­tered narcissist’ like his dad, and she’s demanding he get his anger issues resolved now.”

Relax lady. Despite the photographer’s allegations, I’m pretty sure he just tripped over Bieber’s ego. Jean-Claude Van Damme your son certainly is not.

But Patti is determined to make sure the apple doesn’t fall far from the tree. CDL reported Justin’s dad, Jeremy Bieber, who has a history of drug and alcohol abuse, beat the crap out of his 20-year-old nephew earlier this year. The nephew accused him of living off Justin’s success, which was probably true, which is why he got his ass kicked. Justin’s dad is a former MMA fighter so he probably kicks hard like Jean-Claude Van Damme.

But Pattie wants her baby-faced, high-voiced son to be a lover, not a fighter. “Pattie knows Justin has a tendency to lose his temper, and that’s why she wants him to nip his anger issues in the bud now – before he blows up and someone gets hurt…. He idolizes his mean-tempered father.”

I have to side with the mother on this one. The Biebs has to control his temper and not go around intimidating people with his new Mike Tyson punch outs and Channing Tatum-like muscles. But it’s a little late to be learning this at 18, right? Perhaps she should have instilled those obvious lessons when he was having tantrums on Walmart floors when he was 6? Just saying… when the beast is unleashed, it can be hard to get him back in the cage.