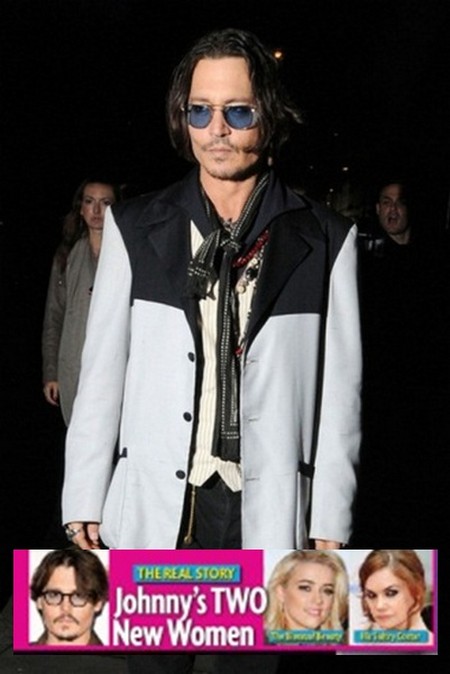 Johnny Depp may have spun the story that he and ex-partner Vanessa Paradis have split because they just grew apart, but more news keeps creeping out about his numerous infidelities including the two other women who are now in the actor’s sights.

Fingers continue to point at Rum Diary co-star Amber Heard as the straw that broke the camel’s back between Depp and Paradis. The openly bisexual star caught Depp’s eyes during filming and has managed to keep them. “Johnny’s been smitten with Amber for a long time,” a source told Star magazine, “and with both of them having wild, bohemian streaks, their chemistry was off the charts!”

But Amber’s wild streak may not be enough for the former bad boy turned Disney star. In addition to reports Depp continues to see his publicist, Robin Baum, he’s also been caught getting close to current Lone Ranger co-star, Ruth Wilson. “She’s an unconventional beauty who’s just Johnny’s type,” the insider said. “They’ve discreetly been spending as much time together as possible — on and off the set.”

What’s with Johnny and his co-stars? There were also rumors he was hitting it with Dark Shadows beauty, Eva Green. That’s just lazy. There’s obviously going to be no reconciliation for Johnny and Vanessa if that’s what you were naively hoping. He’s in the middle of some weird mid-life crisis. He’s partying with Marilyn Manson and passing out in Las Vegas bathrooms. All we need is for him to start smashing up hotel rooms again and his regression will be complete.

Does all this news about Disney’s favorite son turn you off? I actually think he’s getting off easy in this split, which might have a lot to do with Vanessa being French and not as well known to the average American. But you follow gossip. Is serial cheater Johnny tarnished in your eyes?