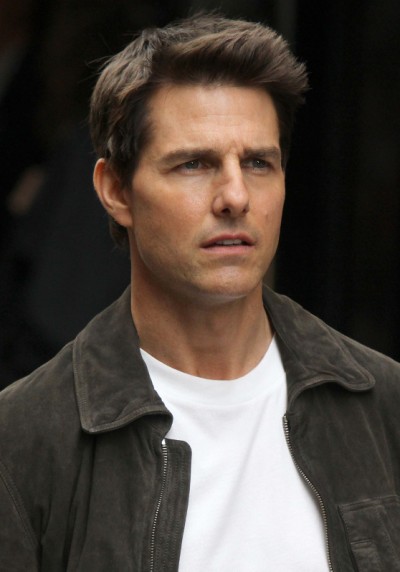 Tom Cruise might be considered the consummate professional but his personal life is causing studios to scramble as they deal with launching his newest big budget movie trailer days after Katie Holmes’ startling divorce announcement.

The Jack Reacher trailer will open for The Amazing Spider-Man, which opens at midnight this Monday. With its stellar reviews, insiders think Spider-Man will draw a lot of people in the seats which should have been great for Jack Reacher. But now every time fans see Tom Cruise on screen, they aren’t going to be thinking about the plot or even if the movie looks decent, they’re going to be thinking about his sh-t storm of a personal life and looney tunes Scientology. I caught myself feeling weird when a half naked hot chick came on the screen because that’s what Tom Cruise has done to me. I can’t imagine him as a lead man who could get a hot chick. Gone are the days of Top Gun and Days of Thunder. I can’t go there with Tom anymore.

And the studios know that so they’re on damage control. The Hollywood Reporter quoted Paramount as saying, “Tom is a huge movie star for the right reason, he’s a very talented actor whose movies have entertained millions of fans. His ability to make a great movie, as we saw with the most recent installment in the ‘Mission: Impossible’ franchise — the most successful of the series to date — is the thing that moviegoers remember above all else.”

In other words, just because he’s crazy doesn’t mean the movie’s crazy, PLEASE go see it! Paramount will not change its marketing for the movie which is set to release during the huge box office season in December. Is that wise? I’ve never read the books but the Jack Reacher franchise is big. People are crazy for it and almost like Twihards in their reverence for the material. But how could Paramount change the marketing? The movie is based on a main character who happens to be Tom Cruise. You can’t just photoshop him out of the promo pics. The American public has a short memory. Maybe the studio thinks this will all blow over by the time the movie hits? Maybe. Maybe not.

Katie’s playing dirty and there could be an ugly custody battle over Suri Cruise. Without saying a word, Katie has made it plain that she will do EVERYTHING in her power to keep her daughter away from Scientology. I don’t think this is going to blow over anytime soon. Unless… unless Tom makes a decision. Tom could give Katie what she wants to keep her quiet. The divorce could be seen as amicable and Tom could worm his way back into America’s heart by seeming sympathetic, loving, generous even. That might save his career – it’s calculated – but it might work.

Because what’s more important to Tom – his career and legacy or his church? Tom Travolta might be a great example here and not one Tom is dismissing, I’m sure. Travolta’s a joke to a lot of people even after starring in some of the most iconic movies of the last thirty years. One might argue, his movies are critically and artistically better than Tom’s (and ya, I’m including Old Dogs). But Travolta couldn’t keep his sh-t together. He chose Scientology over his career and got sloppy. A lot of people assume he’s living a charade all because of the teachings of L. Ron Hubbard.

Does Tom Cruise want to go that route? Does he want to be a laughing stock to the fans he spent his life trying to impress or would he rather reclaim his throne as the reigning king of Hollywood and push his religion affiliation to a corner? What would you choose?

Yesterday I wrote about the possibility that Nicole Kidman chose a career over her children and let Tom raise them as Scientologists. How odd that the same thing is coming back to bite him in the ass. Tom’s always wanted that Oscar and it’s alluded him. How hard would it be for him to find the material and the audience if he just let Katie win this custody battle?

Take a peak at the trailer below. Can you watch it without thinking about Tom’s personal mess?