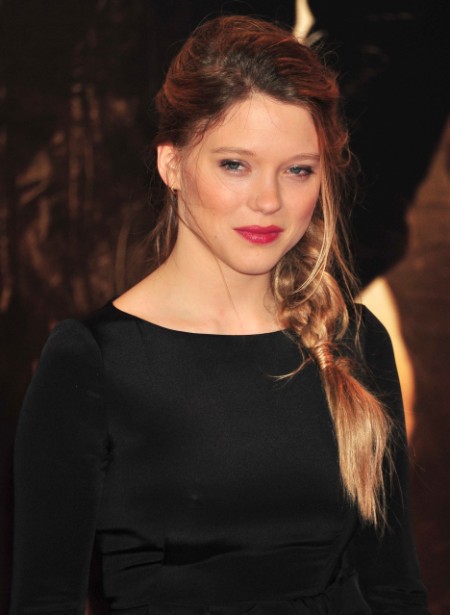 Tom Cruise isn’t wasting any time getting back in the saddle. Even after Vanity Fair humiliated him this week with tales of Scientology wife-auditioning, Cruise is still intent on convincing the world that he’s in charge of his own love life and likes to put the P in the V. But who’s the lucky V? It’s none other than his Mission Impossible – Ghost Protocol co-star Lea Seydoux.

You’ve probably seen the French beauty but just didn’t know it. She had a bit part in Inglourious Basterds and was in my fave, Midnight in Paris. She’s pretty huge in France, and according to Now magazine, just ripe for Tommy to come a knockin’. “He thinks she’s amazing and he fought hard to get her cast,” said the source, “He’d like to make a movie with her in France.”

Wasn’t Ghost Protocol the movie that Tom used as a cover for his “business meetings” with Scarlett Johansson and Lindsay Lohan? I guess it really was a business meeting for Lea. Or maybe his people tried to ask her about Tom but her English wasn’t good enough to pick up the “Would you like to marry him, only have sex to procreate a chosen child, and love Xenu for the rest of your life?” hidden messages. I bet Tommy’s banking on her English having improved since then.

But it’s just like I said! Tom has to move on to the foreign girls! Only the lower tier girls will touch him in America! I hope he doesn’t ruin her. She’s so beautiful and talented. I’d like to see where her career is headed. I don’t want her to turn into a Stepford wife.

But Tom certainly has an MO doesn’t he? Nicole Kidman, Penelope Cruz and Lea Seydoux were/are up and coming foreign hotties desperate to break into the American movie market. Hooking up with Tom helped them do that but then he made them repay him by taking a back seat to his career. Nicole and Penelope managed to get out career in tact! Katie Holmes’ rebound is still up in the air. Hopefully Lea will be smart and stay away. But it will be tough. If he wasn’t so damned good looking!

Do you think Tom is snooping around in the foreign dating pool? Is Lea a decent replacement for Katie Holmes?