Lindsay Lohan Auditioned To Be Mrs. Tom Cruise, Is She Trying Again? 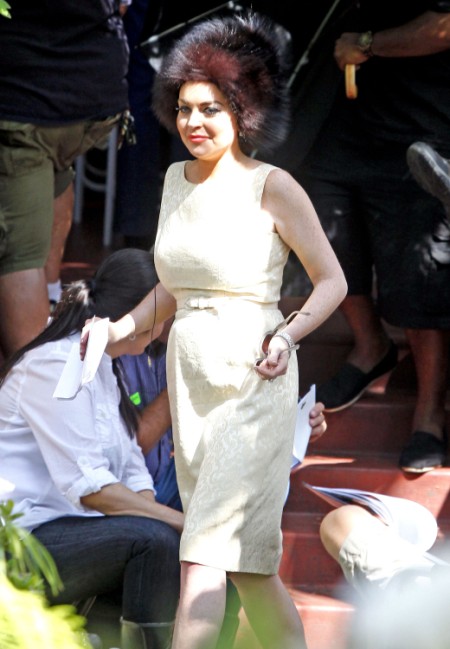 Only in a perfect world, free of war and strife, could Lindsay Lohan have married Tom Cruise. But she couldn’t keep her sh-t together so we have to content ourselves with what might have been! In the wake of Cruise’s embarrassing expose from Vanity Fair, more tantalizing news is getting uncovered regarding Scientology’s wife auditioning process. One name that’s always been whispered about was Scarlet Johansson. Source have alleged that Tommy wanted to make it work with Scarlett but she wasn’t having it so he moved on to Katie Holmes. Only, apparently, he made a pit stop at Lindsay Lohan first!

The Huffington Post reports that a source close to Lindsay (meaning Lindsay or Dina Lohan) is saying that the Chateau Marmont-banned actress had a sit down with Tom when he was fixin’ for a wife in 2005 but she was on to his game. “Lindsay met with Tom before he met Katie. At first, she was super excited to work with Tom and thought it was about a role in ‘Mission Impossible.’ It soon became clear that he wasn’t looking for an actress but something very different.”

OK, let’s back up the clock. Lindsay circa 2004-2005 wasn’t as big of a f-ck up as she is now. Lifetime movies were a world away at that point. Mean Girls came out in 2004 so we’re looking at the height of her fame. I’m pretty sure her hair was still a natural red color and she was only just beginning to test the waters of using excuses like dehydration in lieu of cracked out or hung over. She would have been a nice option for Tommy, maybe a little on the young side, but a viable option nevertheless.

Michael Lohan said he wasn’t aware of a meeting with Tom but why would he? At that point, wasn’t he still in jail? If he wasn’t, he definitely wasn’t in the circle of trust. So if it’s true, what went wrong? Lindsay was a big name. One of Tom’s complaints with Nazanin Boniadi was that she didn’t have her “own power—like Nicole (Kidman)”. Lindsay was in demand. Did Tom sense an uncontrollable aspect with Lindsay? Did he have an inkling she was a klusterf-ck waiting to happen? Because I know Lindsay would have flushed the blow down the toilet for a chance to be Mrs. Tom Cruise. She wouldn’t have done the job justice, which is probably why Tom didn’t pursue it with her, but she would have tried.

But you have to wonder why this is just now coming out from Lohan’s people. The Scarlett story is old news and Lindsay has never spoken up before. But she’s nothing if not opportunistic. She claimed to be one of Heath Ledger’s best friends after he died. She claimed to have partied with Kristen Stewart after the cheating scandal broke. Whenever there’s big news, Lindsay has a knack for getting her name involved somehow. She’s pathetic that way.

But is it too late for Lindsay and Tom Cruise? She’s the perfect candidate for Scientology. She’s a mess and in desperate need of help. Scientology loves that in people. Tom could come to her aid, show her the light, rescue her from herself. It would be movie magic! She could get clean and be one of the biggest celebrities in the world again. You know that’s all she wants anyway. Being an actress has always played second fiddle to Lindsay’s desire to be famous. Tom could make that happen.

Most of Lindsay’s stories are bullsh-t and her memory can only be hazy reaching back to 2005 but it’s still a fun story. I like to think this is her way of throwing her name in the ring for Tom’s fourth go around. I don’t think he can afford to be too picky. He’ll probably have to stick to women who’ve learned English as a second language or dip into the B-list American actress pool. Perhaps Tom’s thinking that everyone deserves a fourth chance and if we see him giving Lindsay hers then maybe we’ll give him his?

What do you think of Lindsay as a possible wife for Tom? Do you believe her story to begin with?