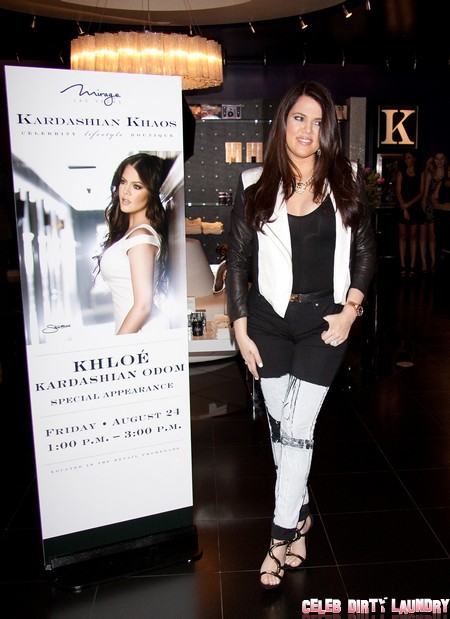 It is no secret that Khloe Kardashian is the largest of the three Kardashian sisters. Of course, she is 10 inches taller than Kourtney Kardashian and 8 inches taller than Kim Kardashian. Despite Kourtney’s two pregnancies (which swelled her petite frame to hot air balloon proportions!), Khloe has often spoken about her body image, like on Ellen when she dished on her Cosmopolitan magazine cover shoot. “Oh, um, I think you sent this to the wrong sister!” she said, when she got the call from her publicist.

While Khloe certainly doesn’t shy away from Kardashian press, she admitted, “I’ve been always ridiculed about my weight. [People are] always saying I’m not the prettiest sister, or I’m too fat.” Whether or not she isn’t the prettiest, or is a bit rounder, it can’t be easy to hear day in and day out!

While she seemed to be comfortable with her body during her April 2012 appearance on Ellen, it seems the young star’s body image has taken a turn for the worse.

Khloe has recently taken to posting obsessively about her workouts on her twitter, posting, “Positive energy please!” and “I’m dead from my workout! But I love it!”

Later she asked her followers, “Who got their fitness on today? What workout did you do???”

Whatever this new exercise craze is, I hope it isn’t going to lead her down an unhealthy path! Khloe needs to accept that she and her sisters will never have the same bodies—mostly because she is a regular sized human and they are tiny with Barbie doll proportions!  Besides, the odds are high that Khloe has a different father than her sisters.

What do you think? Is Khloe’s new obsession for the gym part of a healthy Hollywood lifestyle, or something to be worried about?