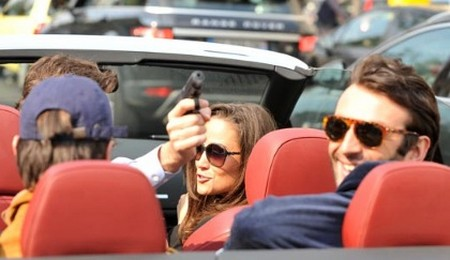 Pippa Middleton is the sister that just keeps giving – giving trouble to Kate Middleton and Prince William.  Pippa’s latest scandal is courtesy of an American company that claims it can hire out Duchess Kate’s sister for $150,000 a pop. Celebrity Talent Promotions says Pippa is available for ”corporate appearances, speaking engagements, endorsements and autograph signings” and has posted a picture of the 28-year-old Paris party girl on its website.

The caption associated with Pippa’s pic says: ”We are a celebrity booking agency that also hires Pippa Middleton as a keynote presenter for speaking engagements, trade shows, conventions and store grand openings.” Adding that, for a price, she can be booked for ”event hosting, licensing deals, product endorsements, print advertising and television commercial.”

The Daily Star Sunday phoned to book Pippa and they were told it would cost $100,000 to $150,000.  Employee Adam Plotkin qualified: ”You have to understand that she is connected to royalty so there are security issues here. The final figure might even be much higher.”

”We’re talking about two or three first-class round-trip airline tickets from London, plus five-star hotel accommodation while she’s here. If you email me all the details about your event we will forward them to her.”

When Daily Star asked Plotkin to give examples of deals he has struck with Pippa, he revealed: “She’s turned down the last three or four things we’ve put to her. You have to realise just how in demand she is right now.”

An official spokesman for Pippa promised an immediate investigation, saying: ”This company does not represent my client and has no authority to make these claims about her on its website. We will be contacting them about this issue.’‘

This is still a step up for Pippa – it beats partying with eurotrash in Paris and threatening  people with guns – disgusting Kate and Queen Elizabeth II.