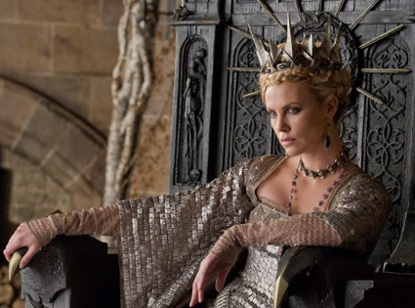 Recently, Universal Studios released a new pic of Charlize Theron from the set of Snow White and the Huntsman and she looks like she’s rockin’ that evil crown — and feeling pretty hot/badass while doing it.

Sorry, Kristen Stewart fans, but we don’t have any pics of Snow White for ya’, but that’s probably because the studio is saving those glamour shots for later on down the road. You know how studios work, they like to keep fans sweating/shaking in their boots in anticipation.

We only have this new pic to show you right now, but what do you all think of Theron’s evil witchery? Just look at that wicked crown with deathly spikes! Yowza. Do you think she can take this whole evil queen thing to another level? Having seen a glimpse of Theron’s acting chops and her ability to pull off a believable “nasty” demeanor in Young Adult, I think she’ll definitely be able to throw some authentic evil in the direction of poor lil’ Snow White.

In case you missed the trailer for the movie, make sure to check it out below!