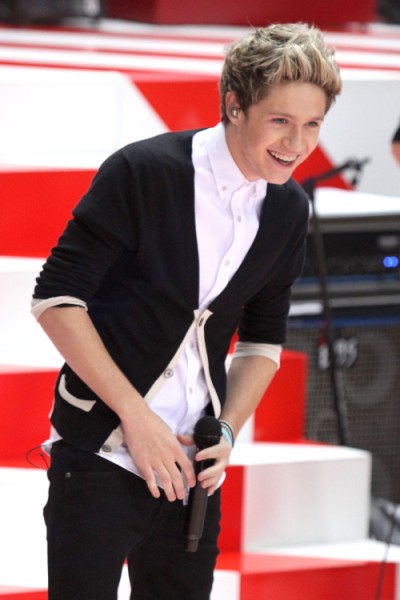 One Direction’s Niall Horan and Carly Rae Jepsen have some explaining to do. In a recent interview with Heat Radio the English boy band spilled the beans on Niall’s busy love life. Apparently Niall’s hooking up with Carly Rae Jepsen on the sly. Someone should probably tell Carly Rae that. As far as I’ve heard, she’s never even met Niall!

I have no idea which boys kept razzin’ Niall about his make believe relationship because they all sound the same and I refuse to learn their names until more albums convince me they’re more than just a flash in the pan… but they are entertaining. I’ll give them that. The guys actually sound like they’re having a blast riding the fame wave. But before you get too excited about the Niall/Carly possibilities, watch the video. If you can get past all the prepubescent girlish giggles, you’ll realize they’re obviously just trying to cause trouble and someone even said they told the American media the same thing even though Niall’s never met her. Too bad. With Justin and Selena dunzo we could all use another bubblegum pop couple to get us through the winter. Besides, whatever happened to Demi Lovato?

But I doubt Carly will ask Niall to call her maybe anytime soon. Carly’s a huge fan of The Wanted and they just happen to be in a bitch fest with One Direction. Apparently they’re the new Oasis/Blur only with really, really crappy music. Carly has played shows and hung out with The Wanted so I’m sure friendship lines have been drawn. She’d never sleep with the enemy!

Or would she? Niall was awfully quiet when his fellow boy banders pulled his chain. Did Niall Horan have sex with Carly Rae? Are we excited about this? Isn’t Harry Styles the Justin Timberlake of the band? I only ask that because did anyone ever care who Joey Fatone screwed around with on the road?