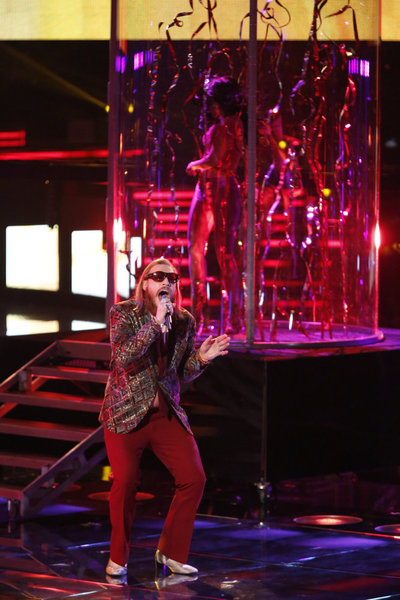 Nicholas David was eliminated during tonight’s Final Results Show of The Voice.  Nicholas came in third place. If you missed tonight’s finale results show, we recapped it here for you!

Last night, the top 3 artists performed two solo songs and one with their coach, live in front of coaches Christina Aguilera, Adam Levine, CeeLo Green and Blake Shelton for a last chance for America’s vote and a chance to be crowed the winner of The Voice.

On last night’s show Nicholas David sang Great Balls of Fire by Jerry Lee Lewis & Lean On Me by Bill Withers – Nicholas, the eccentric and unique singer, delivered two performances worthy of praise. Yes, it might not have been contemporary enough for modern day audiences, but it was definitely worthwhile. Nicholas is able to channel nostalgia; and nostalgia sells. However, the manic rocking during Great Balls of Fire might have been a bit too theatrical for the general voting blocs, but at least it wasn’t a horrible performance. On the other hand, Lean On Me was subdued, subtle, and absolutely beautiful.

OUR PREDICTION was Nicholas might not win the competition, but he will definitely make an impact on the niche genres in the music industry. It will be interesting to see whether Nicholas regains his composure after the show and becomes a best-selling artist. It’s not likely, but it’s possible.

What do you think, was Nicholas’ elimination uncalled for? Should Nicholas have won The Voice season 3?  Let us know in the comments below.