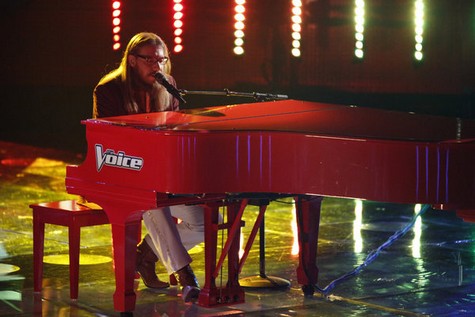 Nicholas David took the stage tonight on THE VOICE for his Semifinal performance.  Nicholas sang “You Are So Beautiful” by Joe Cocker  Tonight’s show the final 4 performed live in front of coaches Christina Aguilera, Adam Levine, CeeLo Green and Blake Shelton for America’s vote and a chance to move on to the finals.

On tonight’s show the remaining four contestants will be singing inspirational themes.  This week Nicholas got to go home to visit his family Minnesota.  Nicholas gets to see his new house for the first time. Next stop is the doctor’s office to hear his baby’s heat beat, then on to the Mall Of America where he was presented with a golden microphone. Last stop for Nicholas is a place he used to sing at, the Happy Gnome.  Did you miss tonight’s episode?  If you did we watched it and we recapped it here for you.   If you missed any of the performances, you can see all the videos here!

Judges Comments: Adam “That is just all I ever care about with any singing from anybody, you are one of the most soulful people I have ever met, I like you”. CeeLo “You look very handsome tonight, this was the right thing to do, it was beautiful and we are your family Nick”.

Nicholas is dedicating tonight’s song to his whole family, “You Are So Beautiful. ”To vote for Nicholas David: 1-855-VOICE-02