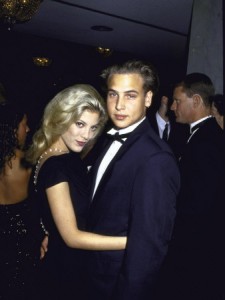 Nick Savalas, Tori Spelling’s ex boyfriend, was cruel and abusive towards the 90210 star when they dated back in the day. She may be popping out babies left and rightl with her hot husband Dean McDermott but her pre-marital life wasn’t exactly sunshine and rainbows.

In a personal journal entry posted online, Spelling called out her former lover Savalas and gave her 21-year old self some advice.

Tori writes, “I would tell 21-year-old Tori that she’s strong, beautiful, smart, and can do anything that she sets her mind to. At 21, my biggest obstacle (well, aside from a bad boyfriend) was myself. I lacked such self-confidence that I constantly stood in my own way.”

Because she had such poor self esteem, her two year relationship with live-in boyfriend Savalas was tumultuous and it took her forever to get out of the abusive relationship.

Tori told Entertainment Weekly, “It was a nightmare. He was never physically abusive, but he was verbally abusive, telling me 10 times a day how ugly I was. Although I don’t believe in regrets and think every moment makes us the women and moms we ultimately become. It would be nice to give this advice!” He told her TEN times a day that she was ugly?! Yikes! And she listened to his bashing for two years? Cripes, after day one I would have been out the door or kicked his butt to the curb. Easy for me to say though, I guess. Maybe he gave good gifts or was good in the sack?

Nick Savalas is the son of Telly Savalas, who is best known for playing the title role in the 1970s crime drama Kojak. While we don’t know a lot about Nick, we do know that he