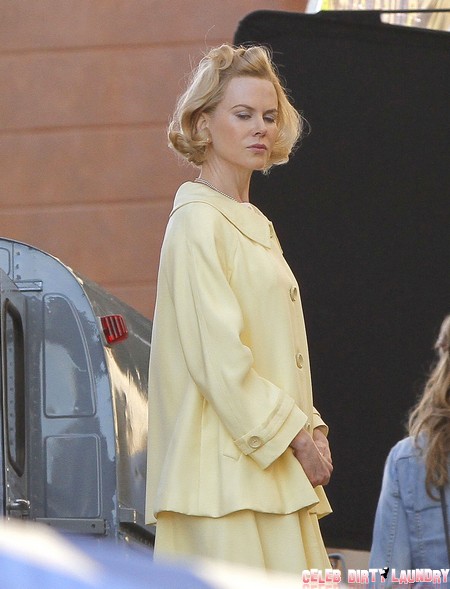 Star Magazine is adamant that “Nicole Kidman is laying down the law for her hubby, Keith Urban.” What law? Who died and made Nicole Kidman the policewoman of this neurotic century? According to the latest edition of Star Magazine, Kidman only allowed Urban to partake as a judge on American Idol if he agreed to strict rules. We know Kidman has been suffering from mental instability for the past few years, but isn’t this just taking it a tad too far?

A source divulged, “He has to be home for dinner at 6:30 sharp – no exceptions!” Oh poop, what happens if he isn’t home? Does that butcher knife go missing again, Nicole? Allegedly, “Nicole’s controlling ways are threatening to ruin his new job. Keith was a really good sport about it for a while, but there’s not a man alive who would want his wife to start ordering his bosses around.” No, we doubt any man (or woman) would allow that to happen, but who marries Nicole Kidman in the first place? It’s the equivalent of marrying a dead fish in a dried up lake bed.

We can only imagine what damage a “strict curfew” could do to a relationship, especially a relationship that’s built on Australian country music and once-upon-a-time acting abilities. Keith’s American Idol judging prowess has not yet been tested by the larger American audience, and while we’re excited to see his late 90’s hair-do on the biggest show on American television, we’re not sure if he’ll be able to be as riveting as Steven Tyler and/or Simon Cowell. We know the show also jumped the shark a while ago, so Keith’s stint on Idol might lead his career down a rabbit hole of sadness, lunacy and Nicki Minaj blow-ups. Hey, Nicole, if you’re looking for company, give us a call! We promise we’ll be on time and everything will be off-record! Yeah, right. About that…

What do you think? Do you think this story is true? Let us know your thoughts in the comments below.