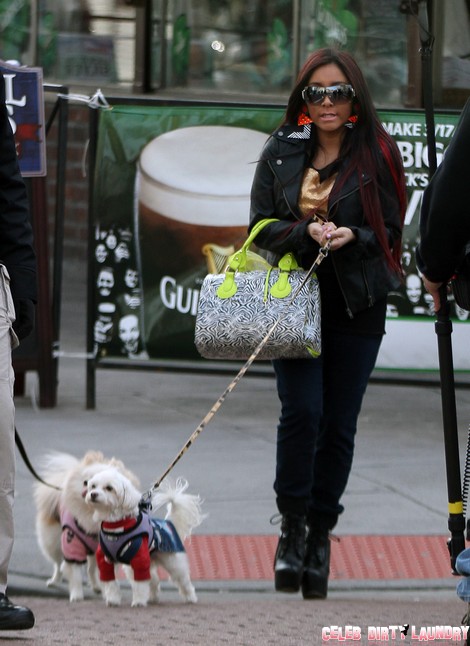 A representative for Snooki told MTV: ”The world just got another Guido! Lorenzo Dominic LaValle has entered into the world weighting 6lbs, 5oz. Nicole, Jionni & Enzo are doing great.”

Did someone actually say that –  “The world just got another Guido?”  And they said this with Snooki’s blessing??  I really can’t find words I can publish to properly express what I think about these low-life imbeciles, Snooki and Jionni.

Of course MTV – which hosts ‘Jersey Shore‘ – added their congratulations, saying they could not wait to see the little boy on the show.  Isn’t that a lovely thing to look froward to – a childhood spent amongst that special breed of idiot who is proud of their ignorance and flaunts it aggressively.

MTV added: ”We couldn’t be happier for Nicole and Jionni on the healthy delivery of their baby boy!

”We look forward to Lorenzo’s first trip to the Jersey Shore and can’t wait to see his first animal print onesie.”

Snooki’s people decided that having a child would be great business for her – so she had one.  Now they can market the mother and child in every way possible – your only defense is to ignore them – as long as you tune in and buy what they’re selling they win and you lose.