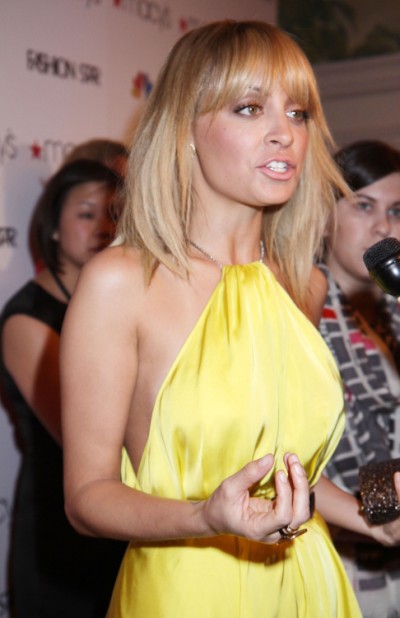 Nicole Richie is contemplating quitting her judging gig on Fashion Star because she’s tired of constantly being in Jessica Simpson’s large, albeit Weight Watchers-diminishing, shadow.

Nicole thought she could use her exposure on the show to pimp her other projects, like her House of Harlow fashion line and acting career, but the National Enquirer reports things haven’t worked out for the former Simple Life star who found it hard to compete with all the attention swirling around Jessica and her new baby.

“Nicole originally believed that by doing the show, she could increase the visibility of her line and maybe score some product endorsements or acting jobs,” a source told the magazine. “But she hasn’t gotten the boost she wanted. As the show progressed, Nicole saw herself becoming second banana to Jessica, and that’s not what she signed on for. It was pretty obvious to Nicole that the producers had the show ed­ited to make Jessica the focus.”

You would have thought that Jessica’s pregnancy might have brought the two women together since Nicole has two children of her own, but it only added more fuel to Nicole’s fire to leave. “Nicole says Jessica acts like she’s the first woman to ever have a baby,” added the source. “She’d rather jump ship now than watch Jessica be Queen Bee next season.”

This is so high school. I wonder if all those years playing Paris Hilton’s plus one is another reason why Nicole is sensitive about not being center of attention. Rumors have plagued the show from the start, whether it was Nicole making fun of Jessica’s crazy weight gain or one of them ignoring the other for some stupid reason. I’m never sure how much I can truly believe from the Enquirer but I bet there’s more truth to this story than most. Those two were never going to mesh well. Whether Jessica is a dumb ass or not in real life, she likes to play one on TV, and Nicole has re-marketed herself as this serious, family woman who has no time and no patience for stupidity. It probably irks the hell out of her that Jessica’s dumb blond routine gets so much play. And I get the too cool vibe from Nicole, like if we were in the same room, she would try her hardest not to make eye contact with me. I don’t ever feel much warmth radiating from the screen. But Jessica would probably come up to me in the food line and tell me how badly she needs to pick her Spanx wedgie – too much information, but much more accessible. Perhaps that’s why Jessica gets more time on screen.

I’ve only watched the show a few times and it didn’t do anything for me. However, from what I saw, it won’t hurt Nicole to pack her bags. And she doesn’t want to get labeled a “mean girl” against Jessica if she stays and tension increases. Like it or not, America has a soft spot for Jessica Simpson and is very anti-bully right now.

Did you watch the show? Did you see any evidence that Jessica got more attention than Nicole and, if so, do you think it’s right for Nicole to move on?