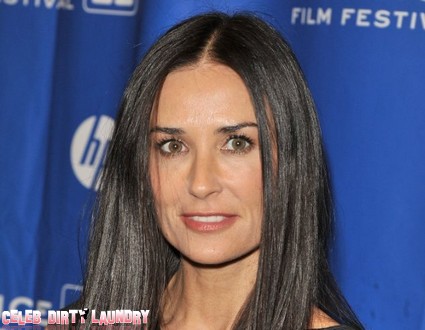 More details have emerged about Demi Moore‘s drug overdose yesterday. The actress was hospitalised after inhaling a dangerous amount of nitrous oxide. It’s usually used by teenagers less than half her age for a cheap thrill – but a 49 year old mother of three?

Demi’s friends called 911 on Monday night after her love of whip its – ‘whip it’ is the street name for a nitrous oxide inhalant – took a turn for the worse. Ashton Kutcher’s ex had a bad reaction to her quick fix high and fell into a semi-conscious state. She basically suffered a type of seizure after inhaling the nitrous and Authorities were called to her LA home. She was assessed and then rushed her to hospital for a ‘substance abuse‘ issue.

Demi is now being ‘treated for exhaustion‘ according to her publicist. There are also reports she’s undergoing treatment for anorexia. The GI Jane star has been wasting away in front of our eyes for the last year – so this overdose has forced her to confront the weight issue she’s battling as well as the drug addiction.

So where is her most recent ex husband? The one who announced after their split that she remains a special woman in his life? Ashton was spotted partying the night away in Brazil. The star of Two And A Half Men has been working in Sao Paulo on a fashion shoot. So when he’d finished on set for the day he hooked up with a bunch of Supermodels and danced the night away at a local nightclub. Demi who?