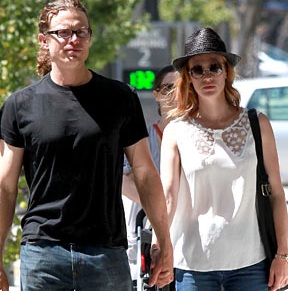 Meet Noah Miller, January Jones boyfriend! But could Miller also be the father of January’s adorable baby Xander? Oh the questions! Come on, don’t tell me you aren’t curious as to who Jones’ baby daddy really is. She walked around rocking a baby bump and the speculation ensued. January went to the hospital alone and gave birth without a man by her side AND she went months toting her sweet little boy without saying a word about the father’s identity. So now that she has been spotted hanging out with Mr. Miller, could this mean that he was the absentee father?

Earlier this week in Santa Monica, California, the Mad Men star was spotted holding hands with a clean cut gentleman who seemed smitten with the now red-headed actress. The couple did have baby Xander along for the stroll (oh, and I can’t forget the nanny!).

Jones’ rep has yet to comment on what the relationship actually is between these two (and they probably think we don’t need to know anyways, but come on, we are dying here!), but there is one thing that we do know. Noah, along with his twin brother Logan, are directing Jones in her next movie titled “Sweetwater”. The movie is about a widow (that’d be January’s part) in 1886 New Mexico who sets out to avenge the murder of her husband.

So while this new movie sounds interesting and all, tell me, do you really think that January Jones’ boyfriend Noah Miller could be her baby daddy as well?