Now Pippa Middleton’s Famous Ass Can Upstage Your Wedding Too 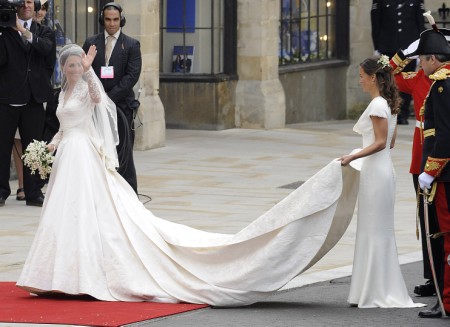 After almost upstaging her sister Kate Middleton when she married Prince William last year, it seems Pippa Middleton has developed a taste for weddings but would like to start planning them – not starring in them. Royal gossip guru and Middleton insider, Katie Nicholl is reporting Pippa has quit her job at her London-based catering company, Table Talk, to focus on helping others have their perfect royal wedding experience.

Pippa’s friends thinks she has loads of experience to just jump right in. “Pippa helped with the Royal Wedding and  weddings don’t get much bigger than that,” says a friend to the Daily Mail. “She is keen to move into party planning for society wedding receptions – it would  be perfect for her. She would go down a storm in America, where they are obsessed with  royalty and they have  a stronger wedding planner industry.”

So does this mean she’s moving to American after all? As an American, I’m offended that these Brits just think they can come over here and plan our weddings because we’re “obsessed with royalty”… although I wonder how much she’ll charge and if she’ll do vow renewals….

But did Pippa really help out with Kate’s wedding? I thought all she did was piss off the Queen by hanging disco balls in Buckingham Palace? Apparently this idea has been mulling around in Pippa’s brain for awhile now. She’s been dipping her toes in one wedding at a time and recently organized the catering at one friend’s wedding in Scotland.

I’m not going to knock Pippa too much for this. It makes sense. She’s known for making a name for herself in arguably the most famous wedding of our generation. Pippa and weddings go together like Kim Kardashian and sex tapes. You can’t say one without thinking about the other. And at least the girl wants to work. She wants a career. Say what you want about Pippa being all upstagey and wanting to capitalize on her sister’s name but that girl goes to work every day and wants to make money. That’s a lot more than her sister did when she was twiddling her fingers for 8 years waiting around for Prince William to propose. What did Kate Middleton do with her art history degree? Or right, nothing. So I’m going to wish Pippa good luck on this venture and send her one her way. I wouldn’t hire her though. Kate might be self-assured enough to share the spotlight with her gorgeous little sister, but I’m not!