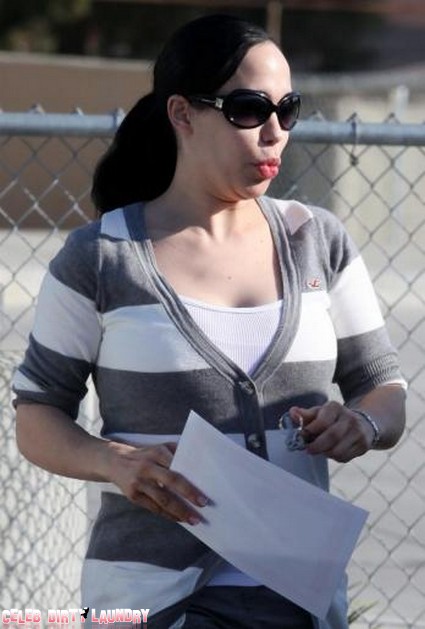 A lot of people aren’t happy that the Octomom – Nadya Suleman – is living off the State of California. The mom of 14 is copping it in person and online and has even received death threats. It follows yesterday’s revelation that she’s getting $2,000 a month on welfare. Celeb Dirty Laundry covered it here Octomom Is A Welfare Bum

According to TMZ…as soon as the news broke her phone started ringing, the emails started pouring in and an online hate campaign got into full swing. A lot of people questioned her financial situation when she decided to have eight kids at once. Nadya swore her massive family would never become a drain on the welfare system. But a couple of years later – here she is going back on her word.

Dozens of nasty messages were left on her Facebook page like ‘Die bitch. I’m not working for your f***ing kids, you’re the one that wanted them.’ but it was the callers who are of most concern. Their messages included ‘You’re going to get yours‘  ‘I’m not working to f***ing pay...’ and ‘F*** you, you don’t deserve…’ There were a few positive messages from mostly single Moms but they were far outweighed by the hate.

At this stage the Octomom hasn’t filed any formal complaints with the Police over the backlash. But she’s obviously worried about her kids and whether anyone will approach them in public. For now she’s planning to lay low and maybe spend some of that welfare check on added security.