BY Annemarie LeBlanc on February 19, 2012 | Comments: 16 comments
Related : Once Upon A Time, Recap, Television 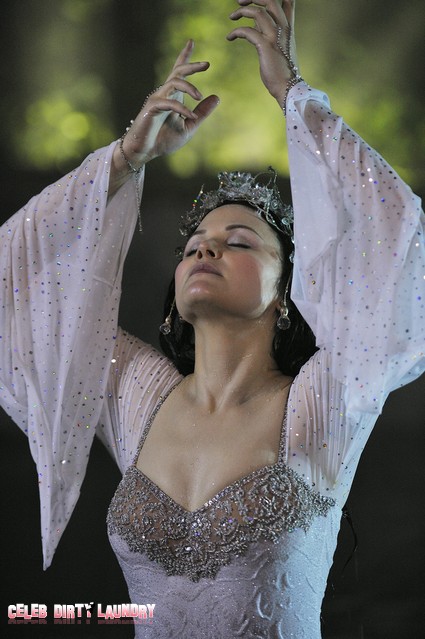 Tonight is all new episode of Once Upon A Time called ‘Whatever Happened To Frederick’ on ABC.   Stay tuned as we live blog the show with up-to-the-minute details.  On last week’s episode the main point of last week’s episode was to up the ante in the power struggle between Gold and Regina. Two significant outcomes – firstly – Gold admits openly to Regina that he KNOWS he is Rumpelstiltskin which entails that he knows EVERYTHING! Also of great significance is that although Gold has more magical power than Regina she has Belle – his true love and greatest regret.  How will Regina try to leverage her knowledge that Belle lives against her arch-enemy, Mr. Gold? Will Regina try to buy Gold’s co-operation by threatening to harm Belle? One thing we know is that Regina holding Belle for ransom is a big part of where this story is headed.

If you missed the show you can read our official recap here!   We also got our hands on some pictures of Robert Carlyle who plays Rumpelstiltskin on the set yesterday – you can see the photos here.

On tonight’s show with their love for each other growing stronger, David finally agrees to tell Kathryn about his relationship with Mary Margaret and put an end to his loveless marriage.  Regina tells Kathryn that David has been having an affair, while Prince Charming must resist a temptation during his search for Snow White.  Prince Charming agrees to help Abigail with a dangerous mission to recover something precious that was lost to her.  Kathryn goes to see Mary Margaret and she slaps her.

We will be live blogging the show with all the up-to-the-minute details at 8PM EST so make sure to come back to this spot and watch the show with us. While you wait for the recap you can watch a sneak peek video of the episode here!

TONIGHT’S RECAP: Tonight we begin in the Fairytale with Abigail arriving at the castle to look for Prince Charming. She doesn’t know that he has taken off in search of Snow White. The king is might pissed and sends his men to look for the Prince.

The kings men are trying to capture Prince Charming but he manages to give them the slip but is caught by others – who we don’t know.

In Storybrooke David is eating dinner with Katherine and she tells him she applied for law school is accepted to go to a school in Boston. Katherine tells him maybe they should make a fresh start – but now it’s too late – should have made new memories instead of focusing on the old.

In the Fairytale we learn that it is her men who captured Charming. Abigail tells Prince Charming she knows he loves Snow White and he will never marry her. He tells her he will never marry someone he does not love. She asks him if he would die for that and she tells him she is there to help him because she does not want to marry him either. She wants to save him before the King nails his butt.

Emma is talking to the stranger and he asks her out. She asks him if he is going to use her as his inspiration since he is a writer. She tells him she does not go out with people who won’t tell her their name. She walks away and he tells her his name is August W Booth. The W stands for Wayne. So now she has no excuse… .

Because Frederick pushed the person who tried to kill her father and touched Midas – he was instantly turned to gold. Prince Charming tells her there has to be a way. Abigail tells him there is a magical lake that has water which can bring you what you lost. Prince Charming tells her he will go and get the water and fight the terrible monster that protects the monster. He wants to do it and have her reunited with Frederick.

August has Henry’s fairytale book and he seems to be sewing new pages into the book!

Regina gives Henry a present and asks him to open it – he asks what the occasion is and she tells him she loves him. She tells him she did not mean to destroy his book. He tells her it is not just the book – he wants to see Emma. He is not satisfied with the game he has received.

Sydney took the pictures but she hid them hoping they would reconcile – Katherine insists that she show her the pictures. Regina shows them to her. She tells Katherine she did not tell her because she thought they were working out because she is her friend. Katherine tells her she is not a friend because she lied to her – everyone is lying to her.

Abigail shows Prince Charming a shrine to the monster of the lake in order to gain mercy. He tells Abigail that he is not offering anything as it never helped the previous seekers – and that she is not going any further he is going on alone now.

David calls Mary Margaret and tells her it was bad, really bad. Mary Margaret tells him he told the truth and now they can pick up the pieces – he is coming by school when it finishes to talk to her.

In the Fairytale Prince Charming is looking for the monster of the lake and asks the monster to show himself. Out of the water comes a women and says ‘Here I am.’

August drives up to the diner and Emma asks him if he is coming in. He tells her to hop on the bike and she is not thrilled about getting on the bike – he knows a good watering hole and he owes her a drink.

August tells her there is one thing he can tell her for sure and she does not need a leap a faith – it is good water.

Mary Margaret is walking down the street and everyone is looking at her. An old lady bumps into her and tells her she should be ashamed of herself.

In the fairytale Prince Charming is at the lake – the beautiful women comes from the lake and the Prince tells her he knows she is a siren and he is immune to her. She says really – she spills water on herself and she turns into Snow White. Prince Charming tells her he knows it is not really what he is seeing and she tells him sometime the illusion is better than the truth. She tries to get the Prince to kiss her and she succeeds. As he kissed her – he drops his sword in the water. He pulls away from her and tells her he wants reality and not an illusion that her kiss is NOT real love. She keeps kissing him and he keeps pulling away and telling her that he knows it is not real. She jumps on him and grabs him down in the Lake and tells him he is the first person who knew. As he goes down in the water he can see all the skulls of the dead men who came before him. A vine ties around his foot and he is drowning. She comes over and kisses him while he is drowning and he manages to get a knife and cuts the vine away and stabs the monster – she sinks towards the bottom and he gets out of the water.

Emma is taking the leaves off her car and she sees a box on the ground under the car. She opens the box and Henry’s fairytale book is there. August is watching her from a distance.

Katherine comes to see Regina – Regina is surprised to see her and Katherine apologizes because she was angry and she should not have got mad at Regina.

Regina tells her change is always frightening but maybe leaving will show her what she has been missing and she will get what she was looking for… .

Prince Charming gets back and gives Abigail water from the lake. Abigail is amazed he could slay the beast. Abigail takes the water and drops it on Frederick’s head and he starts to move and comes back alive.

Frederick asks what happened – and she tells him he is free – Abigail introduces Frederick to Prince Charming who saved him. He tells Abigail he is going after Snow White – because true love is not easy, it must be fought for – but when you find it, it cannot be replaced. Abigail wishes him good luck. She tells him to go fast because her father is going to come after him and he will stop at nothing. He asks for supplies and a horse and Fred agrees. Charming tells Abigail land Fred to get married – true love and all that.

Regina comes into Katherine and David’s house and removes the note Katherine left for David telling him to go to Mary Margaret.

At school Henry is playing with his video game and Emma comes up – and Henry tells her that his mother bought it for him. He tells Emma his Mom is picking him up in five minutes. She pulls out Henry’s treasured fairytale book and gives it to him. She tells him it may have fallen off the dump truck and Henry says maybe. Henry tells her great things are going to change now.

He opens the fairy tale and we see Prince Charming screaming in the woods for Snow White. Little Red Riding Hood comes from the woods and tells the Prince she has not come back since she left to find him. Prince Charming tells Red that he is going to fight for Snow and Red tells him he won’t have to fight too hard, Snow loves him. He says that Snow said she didn’t love him but Riding is convinced otherwise – and Charming thinks maybe someone forced Snow to disavow her love for him. Prince looks up and King George’s soldiers are coming after him – and Kingy says bring me his head – Charming grabs Red and takes off on his steed.

In Storybrooke Emma gets home and Mary Margaret is lying on the bed depressed and she tells Emma she does not want to talk and does not want Emma to leave.

Over with Regina – she has Katherine’s letter and burns it. We see Katherine driving out of town and the letter burns. Then we see a car stop and there is another car slightly in the ditch. The man who has stopped is Frederick. We flash back to Regina who is smiling.