Robert Carlyle On The Set Of ‘Once Upon A Time’ (Photos)

BY Annemarie LeBlanc on February 18, 2012 | Comments: one comment
Related : Once Upon A Time, Television 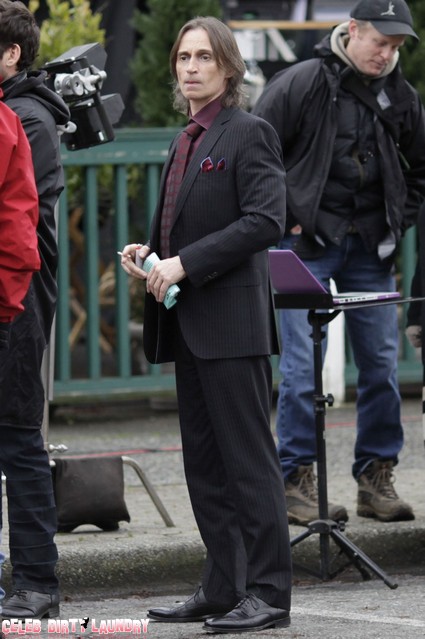 Scottish actor Robert Carlyle, 50,  was spotted filming scenes on the set of  ABC’s hit fantasy-drama series “Once Upon A Time” in Vancouver, Canada today (February 17th, 2012).  We have several pictures of Robert below for you enjoyment.

If you have not tuned into Once Upon A Time the story is set in the small town of Storybrooke, Maine.  The town is populated by characters from fairy tales, who have been exiled to the real world due to a curse cast by the Evil Queen as part of a revenge plot against Snow White, and Prince Charming. Because of the curse, most of the inhabitants of Storybrooke have no memory of their true identities and have been stuck timelessly in Storybrooke for years.  To get caught up on everything Once Upon A Time go here!

Robert is one of the best actors on the show and my favorite character.  He portrays the gleefully demonic but very complex Rumpelstiltskin in the Fairy Tale.  Last week he portrayed the Beast in Beauty and the Beast alongside Emilie de Ravin as Belle.  In Storybrooke his alter ego is Mr. Gold who runs a Pawn shop.

Once Upon A Time is 1/2 through its first season and on last week’s show we learned what we long suspected while Mr. Gold was in jail.  The Major Regina visited him and insisted, “Tell me your name”  after some prodding from Regina/Evil Queen he finally said, “Rumpelstiltskin.”

Then Rumple taunted: “So, now that we’re being honest with each other, let’s remember how things used to be, shall we?  Don’t let these bars fool you, dear — I’m the one with the power around here. I’m gonna be out of here in no time, and nothing between us will change.”

Regina/Evil Queen’s response “We shall see.”  I cannot wait to see how it is going to play out now that they have both come clean.

Once Upon A Time airs Sunday on ABC at 8PM and this week’s episode is called “Whatever Happened to Frederick.”  You can catch some spoilers and a sneak peek video of the next episode here!

Click on the thumbnails below to enlarge 11 pics of Robert on the set of Once Upon A Time!