BY Robyn Good on January 23, 2012 | Comments: Leave Comments
Related : Once Upon A Time, Television, Wrap-Up 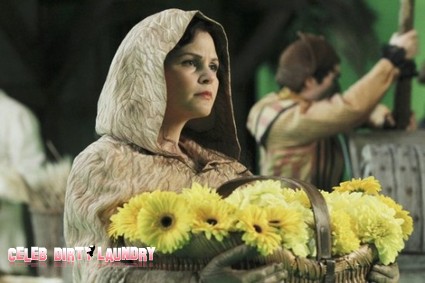 Last night was another new great episode of Once Upon A Time and we recapped 715A.M.for you. We got to see the first kiss between Margaret Mary (Ginnifer Goodwin) and David (Josh Dallas) and we learn more information about Snow White and Prince Charming. In our wrap-up we have some observations of last night’s show and some questions.

When Snow White goes to Rumpelstiltskin (Robert Carlyle) for a ‘cure’ for her love for Prince Charming – he gives her the cure and tells her there is no charge.  He ends up taking a lock of her hair, that is all he wants.   I wonder what Rumple will be doing with lock?  What do you think?

We found out in this episode that there were actually eight dwarfs and not seven.   We met Stealthy the eight dwarf – Stealthy was killed by King James’ guards when he and Grumpy were trying to escape.  Consequently there are only seven dwarfs.

Regina (Lana Parrilla) can see a serious problem looming – her evil plan to control Storybrooke and keep everyone from fulfilling the natural destinies they had in Fairy Tale Land is jeopardized! Nobody should be able to enter the town who is not from the past – even Emma was in fact born in the Fairy Tale as Snow’s daughter. All of a sudden there is motorcycle man driving into town and doing just fine. How can this be? Who is he really? He claims to be a writer and he is schlepping along a typewriter in his box – but even that is strange. I mean who uses a typewriter these days? Do you think maybe the typewriter is magical and might influence life in Storybrooke? Might the mystery writer be able to type the future? What will Mr. Gold have to say about all this. As an antiquarian we can expect him to have special knowledge and interest in the typewriter and its owner. This will be big?

What about Snow taking the easy way out and doping herself to forget the Prince? I was disappointed, how about you? Can her dwarf buddies come up with a cure to undo Snow’s amnesia concerning her love? Will Rumpelstiltskin be involved? Or will Snow fall in love with the Prince all over again? One thing for sure – when Snow gave herself up to save Grumpy from the King’s wrath she earned a friend for life – and apparently all the dwarfs stick together so this will be helpful for her.

They teased us through most of the show with Mary Margaret and David’s romance – several times they were close to kissing.  Finally at the end of the episode they look at each other and fall into each others arms for a passionate kiss.  Regina was looking on looking none too pleased.  What did you think of the kiss, are you glad it finally happened?

What did you think of tonight’s show? Any observations we missed? Sound out in the comments below and let us know your thoughts?

Make sure to come back next Sunday when we will be cover episode 11 called Fruit of the Poisonous Tree. Emma finds herself enlisted by a dejected Sidney to help uncover evidence that could expose Regina’s corrupt dealings and Mary Margaret continues to secretly meet David in an attempt to figure out a way to fulfill their love. Meanwhile the backstory of Snow White’s father King Leopold is revealed along with his encounter with a Genie trapped in a magic lamp – who grants Leopold three wishes but warns the King to be careful what he wishes for.

Make sure to stop by because we will be live blogging the episode with all the up-to-the-minute details.