BY Annemarie LeBlanc on January 30, 2012 | Comments: Leave Comments
Related : Once Upon A Time, Television, Wrap-Up 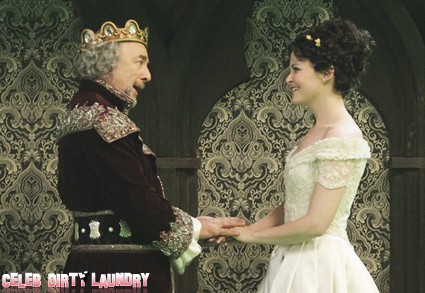 Last night was another new great episode of Once Upon A Time and we recapped ‘Fruit of the Poisonous Tree’ for you here.    On tonight’s show we learned more about Regina and her magic mirror and how she came upon it.  In our wrap-up we have some observations of last night’s show and some questions.

Sidney Glass recruited Storybrooke Sheriff Emma to help him uncover evidence of Regina’s corruption and I really bought it.  Were you surprised when in the final scene, Regina praises Sidney for the elaborate set-up of Emma?  Did you figure it out before they let the cat out of the bag?  I question Sidney trusting Regina after all she screwed him big time in the fairytale.  Do you think he is really on Regina’s side?  Perhaps in the end he is playing he is complicit with her but he really isn’t .  He has  every reason and more to be desirous of Regina’s downfall.  Perhaps he is the epitome of the true double agent.

We found out why Sidney Glass’ last name is Glass – he is the Evil Queen’s magic mirror in the fairytale.  But he didn’t start as a mirror, he was originally a genie  trapped inside a lamp until King Leopold (Snow’s father) set him free.

Henry’s fairytale book was lost in tonight’s episode and Emma vows to get it back.  The Stranger has Henry’s book, or maybe Henry had the Stranger’s book and now the Stranger has it back – how do we know?  But the Stranger definitely knows something about the book and its importance.  Who is the mystery man who is now in possession of the book?

Sadly we did not see Mr. Gold much tonight.  He sold Regina some land and at one point he tells Emma she needs a strong ally, implying him, but she is not interested.  Do you like me look forward to the day when Emma accepts that Mr. Gold is her true ally against Regina and they hook up together?

The next episode of Once Upon A Time will not be airing until February 12th, 2011 and will be called ‘Skin Deep.’   The official synopsis reads: “Skin Deep” — After Mr. Gold’s house is robbed, Emma keeps a close eye on him when it looks like he wants to track down the criminal and dole out some vigilante justice as payback, and Valentine’s Day finds Mary Margaret, Ruby and Ashley (Jessy Schram, “Falling Skies”) having a girls’ night out. Meanwhile, in the fairytale land that was, Belle (Emilie de Ravin, “Lost”) agrees to a fateful deal to give up her freedom in order to save her town from the horrors of the Ogre war, on “Once Upon a Time.”  For a sneak peek video of Skin Deep head over HERE!

Make sure to come back and visit us February 12th, 2012 when we will be live blogging the episode!  In the meantime, let us know what you thought of tonight’s episode and the answers to our questions in the comments below!