BY Annemarie LeBlanc on January 8, 2012 | Comments: 5 comments
Related : Once Upon A Time, Recap, Television 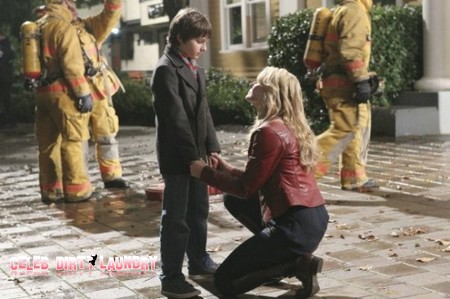 Once Upon A Time is back with a whole new episode on tonight on ABC.  This is the first episode since the mid-season hiatus.  Stay tuned as we cover the official recap of show with up-to-the-minute details.  Tonight is the eighth episode of the ABC hit Once Upon A Time and it called ‘Desperate Souls.’   On the last episode before the break Storybrooke mourns the loss of one of their own.  Meanwhile, in the fairytale world that was, the Evil Queen attempts to find a heartless assassin to murder Snow White.   If you missed the last show before the hiatus you can catch our official recap here.

Tonight’s official synopsis: Regina and Mr. Gold play dirty politics and take opposite sides when Emma runs for a coveted Storybrooke public office against Sidney. Meanwhile, back in the fairytale world that was, Rumplestiltskin tries to track down the ultimate power source in order to help his son avert the horrors of a meaningless war, on “Once Upon a Time,” SUNDAY, JANUARY 8 (8:00-9:00 p.m., ET) on the ABC Television Network.

We will be live blogging the show tonight starting at 8Pm EST with all the up-to-the-minute results.  So make sure to come back to this spot and refresh often.  If you want some spoilers and a preview video of what is going to happen tonight, check it out here!

Tonight’s RECAP: Tonight’s show opens in the fairytale Rumpelstiltskin is sewing and a girl from his village is taken to serve as a soldier.  Rumple is frightened his son will be taken since he reaches the age of draft in a couple of days.

In Storybrooke Mr. Gold expresses his condolences to Emma and offers Emma his support if she chooses to run for sheriff.

The show opens with Emma meeting Henry at his fort and she gives him a walkie talkie and Henry tells Emma that he thinks they should stop the Cobra stuff he,  He tells her they should not mess with a curse.  Henry tells Emma that the Evil Witch killed Sheriff Graham because he was good and he is worried about Emma because she is good.  Henry does not want to upset the Evil Witch (Regina) anymore.

Emma is in the Sheriff’s office and she is looking at the sheriff’s badge.  Regina comes in and tells Emma it is not for her she intends to appoint Sydney from the postal office.  Regina tells Emma she has not earned the right to wear the badge.  She fires Emma and takes the badge.

Emma is at home trying to fix the toaster she needed to hit something so she hit the toaster.  She tells Mary Margaret that Regina fired her.  Mr. Gold comes to the door he wants to discuss something with her.  She invites him in – he tells her he heard what happened and he feels it is an injustice.  He tells her two people with a common goal can accomplish a lot but two people with a common enemy can do much more.  He asks her if she has checked out the town charter.  Perhaps the mayor is not as strong as she thinks she is.

In the fairytale Rumpelstiltskin and his son are leaving, he tells his son that he does not know what war is like.  Kinghts on horses find them on the King’s road and they ask where they are going.  Rumpelstiltskin is much different he is meek, the knight asks Rumple’s son how old he is and he finds out he is 13 and will be 14 in two days.  The knight’s tell his son that Rumpelstiltskin ran during the war of the Ogres.  The knight tells Rumple that  it is treason to avoid service and they want to take his son who will be old enough to serve.  He ask what he has to do to save his son and the  knight tells him to kiss his boot in front of his boy.  Rumple bends down and kisses his boot and the kinight kicks him.  The knights leave and an old man comes to help them.  Rumple tells the old man he has nothing and the old man tells him not to worry.

Emma comes to see Henry and asks him how school is and she sees he is reading something.  It is a newspaper that Sydney printed and Emma is on the front page and it is a story about her being in jail and having Henry in jail.  Henry tells Emma  that his mother is evil and she is not.  Emma tells him Mr. Gold is helping her and Henry tells her she already owes Mr. Gold one favor she does not want to owe him two.

Emma goes to visit the Mayor and she is pissed Regina had her juvenile records printed in the newspaper.  Emma tells her it is not good for Henry to see his adopted and natural mother fighting.  Regina tells Emma she can talk to Sydney about it all in the debate – apparently there is going to be a debate.  They go to open the door and the door explodes with a huge fire behind it.  Regina falls and she tells Emma she has to help her get up.

In the  fairytale Rumpelstiltskin is working with his son on something that will help him get to the castle to steal the dagger from the Duke.  He tells his son if he can get the dagger, he can get the power and he can redeem himself.  Then he can save his son and all the children of the land.  His sons asks if it is true that he ran and that his mother left him.

Back in Storybrooke Regina tells Emma she knows she is going to leave her.  But Regina gets her out and when they walk out of the building someone takes a picture of her helping Regina out.  Sydney comes over and takes Regina’s picture.  Regina asks Sydney if he is trying to give the campaign to Emma.  All the people of Storybrooke are calling Emma a hero.  Emma tells Henry they don’t have to fight dirty.

Emma sees a rag on the ground and suspects someone set the fire.  She goes to Mr. Gold and accuses him of doing it.  Mr. Gold tells her if he did it, it is because Emma cannot win unless she does something big.  Emma tells him she cannot go along with this.  Mr. Gold tells her if she exposes him, think of what she is walking away from and who she is disappointing.

There is a debate happening today in Storybrooke.  David meets Mary Margaret and she asks David how things are?  He tells her he has a job at the animal shelter.  David is posting campaign pictures of Sydney and Margaret Mary is posting photos of Emma.

Mary Margaret goes to see Emma and Emma tells her she cannot win, she does not fight dirty like Regina.  Emma tells Mary Margaret she wants to show Henry that a hero can win.

In the fairytale Rumpelstiltskin comes back and asks his son to go home and wait for him, his son has a bad feeling.  Rumple looks at the dagger and repeats the words and summons whatever is in the dagger.  He turns around and the Dark One is there and Rumple tells him he controls him.  The Dark One implies that Rumpelstiltskin’s son is not his.  The Dark One asks Rumple what would he have him do and he says die.  Rumple stabs him and The Dark One falls to the ground and it is the old man. He tells Rumple magic always comes with a price and now it is Rumples.  Rumple looks at the dagger and now his name is engraved on it.

In Storybrooke the candidates are at town-hall and are about to debate.  Sydney makes his opening statements and then Emma gets up to make hers.  She tells them she has had a troubled past and they have overlooked it because she was a hero.  She tells everyone that the fire was a setup, that Mr. Gold said he would support her and he set the fire, she has no definitive proof off it but she knows it is true.  She tells them she cannot win that way and she apologizes.  Mr. Gold gets up and leaves.

Mr. Gold comes to visit Emma and tells her it was all an act.  He had to give her a higher form of bravery, the people had to see her defy Mr. Gold.  He tells her by standing up to him the people feel she could stand up to Regina.  Emma asks why he did it.  Mr. Gold said because they made a deal a while ago that she owed him a favor.  Now that she is sheriff he is sure she can find a way to repay him.

That is it for this week, this was one of the better episodes.  It is always good when Rumpelstiltskin gets a lot of airtime.  What did you think of the episode?  Sound out in the comments below!