BY Robyn Good on October 7, 2012 | Comments: 3 comments
Related : Once Upon A Time, Recap, Television 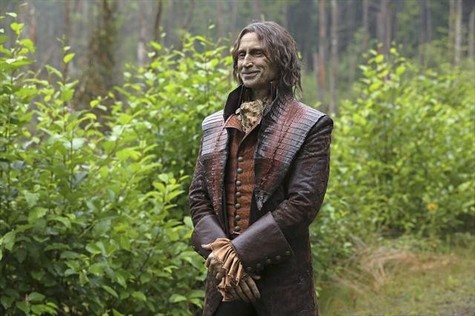 Tonight on ABC is an whole new episode of Once Upon A Time airs called “We Are Both.”  On tonight’s show Regina is determined to get her powers back and David continues to look for Mary Margaret and Emma and the Seven Dwarfs learn it is unwise to leave town.  Did you see last week’s season 2 premiere?  We did and we recapped it here for you!

On last week’s second season premiere reality and myth began to merge as the fairytale characters awaked from Evil Queen Regina’s broken curse and remembered who they were. But to their dismay, they were not transported back to fairytale land. To make matters worse, Rumplestiltskin – aka Mr. Gold – in an effort to gain the upper hand in his power struggle with Regina, introduced magic into the town.

On tonight’s show Prince Charming runs onto the Town Hall front lawns desperately searching for Mother Superior (Blue Fairy), who is actually one of the fairies who helped send Emma through to Storybrooke via the magical tree. Prince Charming asks if there might be another one on the other side; she says it’s possible, but that she doesn’t know, and, without any fairy dust to guide them, there’s no way of knowing.

The town is in an uproar, and they’re looking at Prince Charming to be a leader, a man brave and smart enough to save them from this horrible, magical ordeal . . . and maybe even get everyone back home. To their real homes!

Tonight’s episode 2 is going to be exciting, and you won’t want to miss it. So be sure to tune in for our live coverage  of the season 2 episode 2 of Once Upon A Time — tonight at 7PM EST! (Yep we get it earlier here) While you wait for our recap, hit the comments and let us know what you thought of the season premiere of Once Upon A Time last week!

Tonight’s recap: Tonight’s show opens at the end of the “Leaving Storybrooke” sign. The Dwarfs are at the line at the end of town and they want to test if they can cross the line, Grumpy is leading them.  They pick straws to see who the first dwarf who will cross is.  Sneezy is the unlucky one and when he crosses he starts to break up.

In Storybrooke the residents are trying to clean up after the aftermath of the curse being broken.  Marco is putting signs up he is trying to find his son Pinocchio.  David goes to Regina’s house and he asks her to tell him about the hat that Emma and Mary Margaret went into.

Regina is surprised he came alone.  David tells Regina he knows that she is having a problem and the only thing that is keeping her alive is Henry.

David wants to know about the hat, Regina claims she knows nothing about it (liar, liar).  Regina wants to know where he would go in a void to find Emma and Mary Margaret.  Regina is not happy because Henry is with David.

In the Storybook the Regina is riding a horse and a tree grabs her off.  Regina’s mother, Cora has cast a barrier spell to keep her where she wants.  She is keeping her in the town so she can marry King Leopold,  Regina tells her mother she does not want power, she wants to be free.

David goes to see Henry and all the residents of Storybrooke are asking David questions.  David asks Mother Superior if there is a tree that can send them back.  She tells David that there is no fairy dust to make it work.

The dwarfs run over screaming, they have discovered something.  If you leave Storybrooke you lose your identity in the fairytale and become a regular person.  So Sneezy no longer knows he is a dwarf he thinks he is Tom, a man.

The towns folk are in a panic.  David asks everyone to meet back in 2 hrs he will tell them all the plan then.   Regina is trying her magic but it is not working that well.  She goes outside and Dr. Hopper shows up and wants to know if she wants to talk.  Regina tells him forget it, he tells her she may figure out who she is.  Regina tells him she KNOWS who she is.

In the fairytale Snow White is with Regina and Snow finds a necklace and she asks where it came from.  Regain tells her Daniel gave it to her and Daniel was killed because Snow spoke to her mother.  Regina tells Snow that her mother corrupts young souls. (We then find out Regina was only day dreaming the incident)

Mr. Gold gives her the book and tells her she looks just like her mother.

In the fairytale Cora is sleeping and Regina steals the book.  She reads Rumpelstiltskin I summon you.  Regina asks him what he is.  He introduces himself to her but tells her he knew her long ago.  He knew this day would come.  He says he is so happy they are back where they belong.  Regina asks him where is that?  Rumple replies, “Together!”

David is practicing his speech to the people of Storybrooke.  Henry sees the hat that Emma and Mary Margaret went into and tells David he know what it is.  He finds the hat in his book and tells David it belongs to the Mad Hatter.

Henry wants to help David, he feels the curse was broken because of him.  David comes to visit Mr. Gold.  Mr. Gold tells him he is sorry about David’s wife and daughter.  David tells Mr. Gold he is there to buy something, he wants a way to find someone.

Mr. Gold gives him a potion and tells him to pour it on the object and then follow it.  Mr. Gold wants peace, David agrees for the potion he wills stay out of Mr. Gold’s way.  He tells Mr. Gold that if you try to cross the border of Storybrooke you lose your memory of your hold life.  He tells Mr. Gold they are stuck there.  David leaves the shop and Mr. Gold goes nuts and uses his can to smash everything.  It looks like Mr. Gold is not pleased that people cannot leave Storybrooke.

In the Story Book Rumple tells Regina he knows everything about her, he held her in his arms when she was a child.  Regina asks if he can help her.  Rumple creates her a portal that she can put someone in, it looks like a huge present.

In Storybrooke Regina is reading the spell book.

David pours the potion on the hat and the hat starts to shake and David starts to follow it as it starts to fly away.  The hat falls on an overturned car.  In the car is a man holding a stuffed rabbit.

The members of Storybrooke are gathered and they are waiting for David who is late.  The doors open and Regina walks in and says, “My what a nice turnout, no need to make a fuss it is just little old me!”  It seem Regina’s magic is back, Ruby asks what she wants.  David says she wants, ME!  David agrees to go with her as long as she leaves everyone alone.  Regina says, “That’s my boy!” and they leave together!

David is talking to the man (Mad Hatter) that he saved from the over turned car and he asks him if he can get him Emma and Mary Margaret back.  The Mad Hatter tells him he cannot but if he could find the Enchanted Forest he can.  David is surprised the Forest still exists.  The Mad Hatter starts chanting and he runs and David runs after him and Ruby comes and tells David that Regina has Henry and the town all want to leave and if they cross the town line they will all lose who they are.

Henry gets home with Regina and she tells him things are not going to go the way they were.  Henry runs up to his room and drops tied sheets down the window and starts to escape.  As he goes out the window the tree grows arms and grabs him.  Regina tells him not to move.

Henry is mad because he accuses her of sending Emma and Mary Margaret away but Regina denies it.  Regina tells Henry she will teach him everything and Henry tells her he does not want to be her.

In the fairytale Regina’s mother Cora comes in and asks her what the huge present in the room is.  Regina claims she does not know and Cora takes the paper off it is a huge looking glass.  Cora tells Regina don’t worry she will be happy King Leopold is old and she will hold the heart of the people in her hands.

David promises she will protect them, from the Evil Queen, but they have to come together to defeat the Evil Queen.  The residents of StoryBrooke are moved by his speech and turn around.

In the Story Book Regina is leaving town and Rumple stops her he ask her where she was going.  She lets Rumple know she was always leaving and gives him back his book.  Rumple wants to know how he liked using magic and Regina admits she loved it.  Rumple tells Regina he will guide her and show her how to use it, but some day she will owe him a favor.

In Storybrooke Regina is sitting in the table and looking at her book.  David breaks in with his sword he wants to see Henry, Regina tells him he won’t need it.

Henry comes downstairs and Regina tells him he can go home with David.  Regina says she does not know how to love but she does know if you hold someone too hard they will not love you.  Regina tells Henry that she wants him to come home on his own.  Regina wants to redeem herself.

David asks her if that is the truth he wants to know if he can get back to where Emma and Mary Margaret are.  Regina replies YES, but she has no idea how.  She asks David to take good care of her son.

In Storybrooke everyone is trying to get back to normal.  David and Henry go into the diner and Henry whispers something in Marco’s earch and Marco leaves the diner and goes to a room and on the bureau pinochios hat is sitting.

Mr. Gold is at the border of Storybrook looking out.

Regina takes the spell book to the fireplace to burn and then thinks better of it and puts it away.

David tells Henry the Enchanted Forest exists, is out there.

Henry asks how David is sure Emma and Mary Margaret survived the trip and David tells Henry, he can feel it.

Mulan tells her people to take them to the pit.  Emma tries to wake Mary Margaret up and she hears a voice asking if she can help.  A women walks in and Emma asks who she is and she replies, a friend….  Oh, No, it is Cora, Regina’s mother.