BY Robyn Good on September 30, 2012 | Comments: 8 comments
Related : Once Upon A Time, Recap, Television 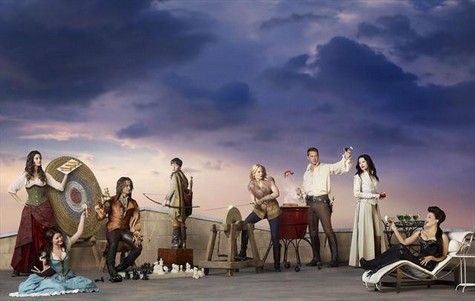 Tonight on ABC the second season of Once Upon A Time called “Broken” premieres.  In Season One of “Once Upon a Time,” Evil Queen Regina had cast a curse that brought the fairytale characters into our modern world and trapped them in Storybrooke with no memory of their former selves. Here they languished, ageless for 28 years, until Emma Swan stumbled upon them through her son, Henry, whom she had given up for adoption years earlier.

Over time Emma came to understand that she herself was the progeny of fairy tale characters – Snow White and Prince Charming – and having begun to see cracks in Regina’s curse and her hold on Storybrooke, set about breaking both. If you missed the finale of season 1 you can read our full and detailed recap here!

On tonight’s show called “Broken” reality and myth begin to merge as the fairytale characters awaken from Evil Queen Regina’s broken curse and remember who they were. But to their dismay, they aren’t transported back to fairytale land. To make matters worse, Rumplestiltskin – aka Mr. Gold – in an effort to gain the upper hand in his power struggle with Regina, has introduced magic into the town.

In fairytales magic has its place, but in our world it can have unfathomable consequences. Meanwhile, back in the fairytale land, Prince Phillip awakens his sleeping beauty, Aurora (Sarah Bolger, “The Tudors”), but discovers that he and his traveling companion, Mulan (Jamie Chung, “Sucker Punch,” “The Hangover Part II”), will soon have to face a deadly foe.

Tonight’s season premiere is going to be exciting, which you won’t want to miss. So be sure to tune in for our live coverage of of the season 2 premiere of Once Upon A Time — tonight at 7PM EST! (Yep we get it earlier here) While you wait for our recap, hit the comments and let us know how excited you are about the new season of the Once Upon A Time?

Tonight’s recap: Tonight’s show opens with Jefferson (Mad Hatter) in Storybrooke and there is a postcard on his desk at home that says Broken on one side and on the other side it says “Welcome To Storybrooke.”

In the fairy tale the Prince Philip kisses Aurora as his traveling companion Mulan stands by watching.  The prince tells the man “If it works we don’t tell her everything right a way.”  Aurora tells Prince Philip that he told her not to come after her.  He tells her together they are going to rebuild the castle.  Prince Philip tells Aurora she needs rest.  Aurora asks where her people are and if  they hiding from Maleficent.  Prince Philip tells her not there are new dangers now but nothing they cannot handle together.

Henry tells them all Emma saved them.  They wonder why they are still there and what the smoke was.  The Blue Fairy walks up and tells them it is magic, matters are complicated now.  They want to go see Regina, but Emma tells them it was not Regina who broke the spell.

Mr. Gold is with Belle and he tells her she has to tell him what happened.  Mr. Gold and Belle kiss.  Mr. Gold looks worried.

Emma tells the people the only questions she has is for Mr. Gold and why he double crossed her and what he did to the town.  Mary Margaret wants to talk to Emma and know about her life.  Emma needs time she does not want to talk now.  The townspeople are in a frenzy and they are all headed to Regina’s house to get her.  Henry wants them to help his former Mom Regina.  David is worried the townspeople are marching into a slaughter because Regina may have her powers back.

In the fairytale Mulan  puts his hand on the floor and takes out a sword and the ground vibrates and a demon comes out.  Prince Philip goes after the demon with a sword and a medallion falls off.  Aurora asks what the thing was and Prince Philip answers, something bad.

Belle and Mr. Gold go to his shop and he wants to find her some clothes.  He opens a chest and takes out a gold box and the medallion that Prince Philip took from the demon is in it.

The townspeople knock on Regina’s door and tell her she took everything from them but first she has to suffer.  Regina asks if they wanted to see their Queen and she motions to change.  But the townspeople scream she has no power.  Emma and David come and stop the townspeople from hurting Regina.  Mary Margaret and David tell the people Regina’s death won’t solve anything.

David asks Regina why they did not go back to the Fairytale and Regina tells them the land is gone and there is nothing to go back too.  They leave, and Rumpelstiltskin walks in.  Regina asks him if this was all his doing and he agrees it was.  He also tells Regina he promised he would not kill her.  He promised Belle.

Rumpelstiltskin realizes that Regina only kept Belle alive because she wanted to kill her in her own time.  Rumpelstiltskin intends to do the same thing to Regina.  He has the medallion in his hand but he is wearing gloves and he touches Regina and says, “The one thing we cannot avoid – “Destiny”

Prince Philip introduces Mulan to Aurora and Mulan tells her about the demon.  It is a soul sucker, it sucks the souls out of people.

Mr. Gold is in the forest with a knife (the one with Rumpelstiltskin’s name engraved in it) and he drops the medallion to the ground and repeats, “the dark one summons ye” He sticks the knife through the medallion.  At the same time the medallion imprint comes on Regina’s hand and the demon appears to Rumpelstiltskin.

Emma is still upset that they sent her away for 28 years and she was alone.  Mary Margaret tells her if they had not send her away she would have been cursed and Emma tells her at least they would have been together, what is worse.

In the fairytale Mulan wants to camp for the night, Aurora is not overly pleased that Mulan is a beautiful women.  Prince Philip wants Aurora to sleep but Aurora does not want to.  Prince Philip is going to find wood and he needs to leave Aurora alone for 5 minutes.  They embrace and they profess their love.

Emma, Mary Margaret and David come into Mr. Gold’s shop.  Emma asks him what he did and Mr. Gold pretends he has no idea what she is talking about.

Mr. Gold wants to answer her questions with some of his own.  1) Is Henry alive.  2) Is the curse broken 3) and is Emma reunited with her parents?  Mr. Gold says they should thank him.  Emma wants to know what the purple smoke was.

In the jail cell the demon comes after Regina and he knocks the door out of the cell and starts to suck Regina’s soul out.  David comes in and smacks the demon with a desk and he hits him Mary Margaret comes in and sets the demon on fire and it leaves.  Regina falls on the ground.  Mary Margaret asks if she killed it.  Regina tells her no he will be back – he won’t stop until the soul sucker sucks her soul out.

Regina asks where they thing the Soul Sucker came from and Regina tells them Mr. Gold.  Emma tells them they cannot let Regina dies, they promised Henry.  Regina is surprised that Henry asks them to save her.  Regina opens a hat, Jefferson’s hat.

Regina takes the top hat and puts it in the middle of the floor she tells them they have to send it back through the hat.  David brings torches to protect them.  Since the fairytale does not exist anymore sending the demon in it will hurt no one.

In Storybrooke the soul sucker comes in the room and David waves the torch at it and traps him behind the flames.  Regina tells them the hat is not working.

Back in Storybrooke  Regina tells them it is not working, magic is different here.  Emma puts her hand on Regina and the hat starts to work and the soul sucker is pulled into the hat.  At the same time Emma got pulled into the hat.  Mary Margaret screams, “I won’t lose her again” and jumps into the hat.  David yells, “Me Neither” and he jumps on the hat but the portal closes and he face plants on the floor.

Mulan and Aurora have Prince Philip and they have him on a pedestal.  Mulan gives Aurora the medallion in a package and tells her she should have it.

David yells at Regina and asks where are they.  Regina tells David she has no idea and then she slams him into the wall, it seems Regina has her power back.  She tells David she should have killed him.  Henry walks in and screams and asks what she is doing.  Henry asks where is his mother.  Regina tells him that they fell in a portal.  Henry tells her she really is the Evil Queen and he never wants to see her again until she gets Emma and Mary Margaret back.  Henry goes with David and Ruby his grandfather.

Belle comes to the shop to see Mr. Gold she wants to see if he is okay.  Belle sees that Mr. Gold still has Belle’s chipped cup.  He tells her it is the only thing he really cherishes.  Mr. Gold tells her she has to leave because despite what she sees he is truly a monster.  Belle tells him that is the reason she must stay.

Henry comes into Mary Margaret’s place and looks at a frame with a picture of Henry and Emma.  David tells Henry not to worry that Mary Margaret and Emma are safe and that he will find them, he will always find them.

Mulan tells Aurora they must leave because much has changed in the land.  Mulan tells Aurora that Regina cast a curse on the land and all the people were pulled to another land and this corner of the world was not but it was froze for 28 years and now it is not frozen anymore.  However, there are many dangers.  Prince Philip and Mulan found a safe haven and they have to go there.  Aurora seems something in the ruble on the ground.  Aurora starts to life the pieces and there is something underneath.

Aurora asks what it is and Mulan says, “That is what brought the soul sucker and that is what killed our Prince.” and the next thing we see is Emma and Mary Margaret in the ruble.