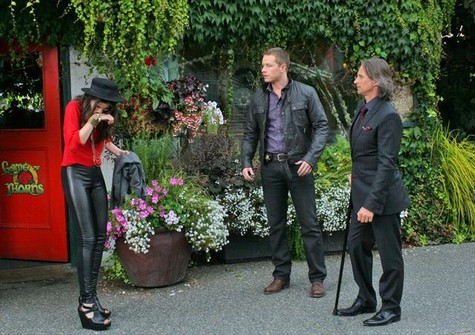 Tonight on ABC is an whole new episode of Once Upon A Time airs called “The Crocodile.” On tonight’s show Belle’s disgust over Mr. Gold’s continuing thirst for power comes to a head, and she threatens to leave him if he can’t change his evil ways. Did you see last week’s episode? We did and we recapped it here for you!

On last week’s show Emma and Mary Margaret, with the aid of Mulan, Aurora and brave knight Lancelot, attempted to find a portal that would bring them back to Storybrooke. But a dark force threatened their safe return. And Henry tried to talk Jefferson into reuniting with his daughter. Meanwhile, back in the fairytale land that was, on the eve of meeting Prince Charming’s mother, King George poisoned Snow White, and the only antidote lies within the waters of the Lady of the Lake.

On tonight’s show Belle’s disgust over Mr. Gold’s continuing thirst for power comes to a head, and she threatens to leave him if he can’t change his evil ways; the dwarves pick up their axes and try to find fairy dust in the Storybrooke mine; and a reunion with an old acquaintance could prove to be Belle’s undoing. Meanwhile, back in the fairytale land that was, Rumpelstiltskin attempts to save his wife, Milah, from being kidnapped by a band of cutthroat pirates.

Tonight’s episode 4 is going to be exciting, and you won’t want to miss it. So be sure to tune in for our live coverage of the season 2 episode 4 of Once Upon A Time — tonight at 7PM EST! (Yep we get it earlier here) While you wait for our recap, hit the comments and let us know what you thought of the  premiere of Once Upon A Time last week!  Catch a promo video and pics from tonight’s episode below!  Don’t forget to come back at 7PM EST for our recap!

Tonight’s recap:  The story opens with Mr. Gold and he gives Belle a beautiful necklace and he is going to take her out to see the nightlife.  Belle thanks Mr. Gold for how he is changing.  One of the dwarfs comes in and demands his ax.   Mr. Gold won’t give it to him and he asks Belle how she could be with such a monster.  Mr. Gold pushes the man into the wall and threatens to put the ax in his chest.  Belle tells him it is not him and Mr. Gold tells Belle, it is, it always has been and always will.

Belle wakes up she was sleeping and she sees Mr. Gold downstairs weaving straw to gold.

In the fairytale that was Rumplestilskin comes home to his son Bey and asks where his wife is.  His son does not know but Rumple assures him tehy will find him.

Rumple comes into the local bar and tells his wife Mila it is time to go.  Mila tells Rumple she needs a break because she is a coward, meanwhile, his son comes into the bar and sees his mother.

Rumple asks his wife if she wishes he had died during the Ogre war.  She wishes he had fought, his wife does not feel they have a life because he did not fight.  She wants to leave the village so people don’t know what he did.  Rumple asks him to try for their son, Bey.  She promises to try.

Mr. Gold comes into the house to make breakfast for Belle.  Belle asks why he was in the basement practicing magic.  Belle wants to know why he brought magic here and why he needs it.  Rumple tells Belle magic is power.

The captain tells Rumple if he wants his wife back he has to take her back and he gives him a sword.

Henry is down in the mine and Leroy and the other dwarfs are digging.  David is there and he is going to the sheriff’s office.

In the fairytale that was, Rumpelstiltskin, the dark one meets with a sailor who has a magic bean that can transport between lands. Rumple wants the bean, and the man wants eternal life.  Rumple offers to spin the clock back and make him a little boy.  BUT, if he does not deliver Rumple will spin the clock back and he will be dust.

Rumple looks up and the sea captain who took his wife is there.

Belle is at the diner and Ruby gives her ice tea and asks Belle if she is okay.  Belle tells Ruby she may be breaking up from her man.  Ruby offers to ask Granny if she can have  a room.  Belle needs a job and Ruby suggests she try the local library.  The library is closed up, but Belle peeks in and there are lots of books.  The sailor in the fairytale comes up to Belle and snatches her.

Mr. Gold comes to the sheriff’s office and asks David, the acting sheriff to help him find Belle.  David asks Mr. Gold many question but he cannot answer him.  Mr. Gold begs David to help him.

Back in the fairytale that was the captain comes to fight Rumple.  Rumple throws the captain his sword to fight.  Rumple asks the sailor if he knows what it is like to have his heart ripped out.  Rumple shoves his hand in the captain’s chest and starts pulling the sailor’s heart out.  All of a sudden a women appears, it is Mila, Rumples wife and she screams, NO!

Belle asks the man who he is and the man tells him he is a man who finds hard to get objects and that is her.  The door opens and it is Belle’s father.  Belle tells his father Mr. Gold was not holding her, he does not understand.  Her father tells her he does not have a choice he tells the man do it.  The man takes her and she screams.

David is having trouble getting people to help him find Belle because Rumple was so mean to people in the fairytale that was.  Mr. Gold asks David dating advice.

David comes to granny’s diner and Ruby tells David he never saw her.  David tells Ruby to trust her.  Ruby admits Belle was in and she sent Belle in the direction of the library.  Ruby tells David she thinks she can find her.  Ruby tells Mr. Gold she may be able to smell Belle because of the wolf thing.  Ruby tracks Belle and they end up in front of Belle’s father’s shop.  They go into his shop and Mr. Gold asks where Belle is.  Her father tells Rumple he is making her safe, he has to make her safe even if he forgets everyone.  He is sending Belle across the townline.

David asks Belle’s father how he intends to make Belle cross.  David sees dirt on his hands and realizes that he has been in the mines and they intend to take Belle out by the tunnels.

Rumple, Mila and the sea captain are on the boat and Mila shows him the magic bean.  Rumple asks his wife how she could leave Bey.  Rumple asks Mila does she know how it was to explain to their son that their mother was gone.  Mila tells Rumple that she never ever loved him and Rumple pulls her heart out and squashes it and Mila dies.

Rumple asks for what he came for and the sea captain wont give it to him so he tells Rumple he will have to kill him.  Rumple cuts his hand off and grabs the bean.  The seas captain goes for a hook and stabs Rumple and Rumple tells him he will have to try harder.  He disappears in a puff of smoke.

Belle goes to Granny’s diner for a meal.  Belle thanks Ruby for everything and Ruby tells her to stay as long as she wanted.  Ruby gives Belle a key and tells her someone dropped it off at the front desk for her.  It is the key to the library.  Belle goes to the library and Mr. Gold is there.  Mr. Gold tells Belle she is right about him, he is a coward and he has been his entire life.  He tells her he tries to make up for it by collecting power and he cannot let go, not even when it meant losing the most important thing thing in his life.

As he walks away Belle asks him he ever had a hamburger and he replies of course.  Belle asks Mr. Gold if perhaps they could try to have a hamburger sometimes because she never has.

Back in the fairytale that was Mr. Gold opens the hand of the sea captain’s he cut off and the magic bean is not there and he realizes he was tricked.

On the boat the seas captain buries Mila at sea.  The man who had the magic bean tells the captain he wants it back and the man is mad because he did not get his eternal life.  The captain tells him he can stay on the site, keep his life and go with them to a land where they can find out how to get even with Rumple.  The man introduces himself as William Smee and the captain puts the hook on his hand throws the bean in the water and a portal opens.  William asks where they are going and the captain says, Neverland!

Back in Storybrooke, Mr. Gold has William Smee tied up.  He wants to know where Captain Hook is.  Smee claims he has no idea.  When the curse hit the captain was not there.

Back in the fairytale that was, Captain Hook is with Cora and she has the remains of the magic wardrobe where they can travel between worlds.  There is not enough yet, but there almost is.  Hook asks where they are going and Cora tells him Storybrooke.  Hook tells Cora excellent, she can see her daughter and he can skin a crocodile.