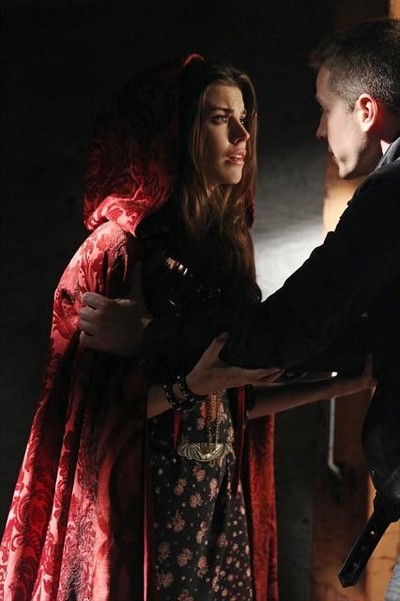 Tonight on ABC a whole new episode of ONCE UPON A TIME airs called “Child of the Moon.” On tonight’s show Ruby fears about what happens when she turns into a wolf in Storybrooke is confirmed, and Red Riding Hoods finds a kindred spirit in Anita, A leader of humans who turn into wolves.  Did you see last week’s episode? We did and we recapped it here for you!

On last week’s show with the hopes of finding a magical compass that could help her and Mary Margaret get back to Storybrooke, Emma took a journey with a not-too-trustworthy Captain Hook up a treacherous beanstalk in an attempt to steal the item from a murderous giant (Jorge Garcia, “Lost”). Meanwhile, Emma’s past was revealed to be anything but magical when she mets up with a fellow thief who wanted to make an honest woman out of her.

On tonight’s shop Ruby’s fear about turning into a wolf during the first curse-free Storybrooke full moon is confirmed when one of the town’s residents is viciously murdered, and Ruby is the prime suspect; Decker – aka King George – threatens to expose David as a shepherd, not a prince, and not fit to run the town as sheriff; and Leroy stumbles upon some treasure in the Storybrooke mine that could help bring Mary Margaret and Emma back into our world. Meanwhile, in the fairytale land that was, Red Riding Hood finds a kindred spirit in Anita (Annabeth Gish), a charismatic and mysterious leader of a pack of humans who, like Red, turn out to be wolves.

Tonight’s episode 7 is going to be exciting, and you won’t want to miss it. So be sure to tune in for our live coverage of the season 2 episode 7 of Once Upon A Time — tonight at 7PM EST! (Yep we get it earlier here) While you wait for our recap, hit the comments and let us know what you thought of the premiere of Once Upon A Time last week! Catch pics from tonight’s episode below! Don’t forget to come back at 7PM EST for our recap!

Tonight’s recap: The dwarfs are still mining for fairy dust.  The other guys want him to take a break but Leroy tells them he is helping Charming.  Leroy hits the rock with a pick and they get to diamonds.  The diamonds can be ground to fairy dust.  Charming believes they will have enough dust to make Jefferson’s hat work to bring Emma and Mary Margaret back.

Everyone is celebrating the dwarfs find.  Meanwhile in the diner Ruby is working and Billy asks her out or a date.  He tells Ruby he was a mouse in Cinderella’s panty.  Ruby tells him she is busy and Belle comes up and pretends that Ruby has plans with her.

Charming/David asks Henry if he is still having the nightmares and tells Henry he does not have to worry because he is going to be sleeping in the same room as him.  Spencer congratulates David for the find.  Spencer who was King George in the fairytale that was, tells David that he is going to see that the people of Storybrooke will see who he really is.

Belle and Grannie are building a cage.  Ruby is afraid she is going to turn tonight because it is the first full moon since the curse broke.  Ruby does not want to take any chance.

In the fairytale that was, Little Red Riding Hood and Snow are running from through the forest from the Queens guards.  Snow sees a sign that she is wanted and she stops and pulls it off the tree.  Snow tells Little Red Riding Hood that the Queen is not going to stop.  Red realizes that her hood has gotten torn.  She tells Snow they have to split up because without the hood she is going to turn into a wolf and she does not want to do to Snow what she did to Peter.  They agree to split up for the night.  A man is watching through the trees and he appears to be a wolf too.

Granny comes into the diner and opens the cage to see if Ruby is awake after being locked up for the night.  The cage has been broken and there are claw marks everywhere.

Henry is dreaming again and he is in a room and the flames are everywhere.  He sees someone in the distance and he yells to the person to find out who they are, he wants to know where they are.  Regina wakes Henry up and she tells him he was having a nightmare.  She sees a burn on his hand.

Granny and David find Ruby in the forest sleeping – she remembers nothing about last night, but she is assuming the worst.

David gets a call someone left their car double parked in front of the cannery – he is going to check it out.

In the fairytale that was Red wakes up and goes to the stream to wash herself – she puts down her red cape.  A man comes and steals her cape and threatens to set it on fire.  It is the man who was watching her in the forest.  She jumps him and gets her cape back – he tells her he knows what she is.  His name is Quinn and he is a wolf too.  He tells her he knows how she feels and he knows a way she can control herself so she does not have to turn to a wolf.  He takes her to a trap door.

It is the grand hall of the castle which sunk underground.  Living there are many other wolves.  Quinn wants to introduce Red to Anita another wolf.  Anita comes up to Red and tells her she is her mother.

In Storybrooke David goes to the truck double parked and it is Billy’s truck.  Ruby smells blood, they cannot find Billy, Granny finds him and he is dead – Red starts screaming it was a wolf and it was her!

Henry and Regina goes to visit Mr. Gold – he tells them it was not a dream.  Mr. Gold tells Regina that Henry is having a sleeping curse.  Everytime that Henry goes to the world he is being hurt.  Mr. Gold gives Henry a necklace that will help him control the fear and be able to go back and forth and not get hurt.

David tells Ruby it has to be something else – Ruby is sure it is her but David does not believe it.  Ruby is worried she is going to change again tonight and she is afraid she will hurt someone again.  She wants David to lock her up.

Back in the fairytale that was, Red’s mother tells Red that Granny lied to her.  Granny believes the wolf is something to be ashamed of but Anita does not believe it.  She tells Red she needs help embracing herself and accepting the wolf as part of her.  Anita tells Red she can control becoming a wolf, but first she wants Red to get rid of her cape.  Red embraces her mother.

David locks David in the cell and tells Ruby he will find who really killed Billy.  Spencer comes in and tells David that he has found the killer.  Spencer wants David to hand Ruby over to him and they will give Ruby their justice.

Red’s mother is teaching her how to give into her wolf and accept that she is the wolf.  Ruby wakes up and Anita tells her she finally has become the wolf.  Red does not feel she has to be afraid anymore.

Spencer is trying to get the people of Storybrooke into a frenzy so they can go into the jail and break out Ruby and kill her.   When they go into the jail Ruby is gone.  They have Ruby handcuffed at Granny’s.  David and Granny are going to go and try to find out who killer Billie to calm down the mob.

Red and Quinn are in the wolf den and Snow comes in.  Quinn attacks her and Red stops him from killing Snow.  Snow tries to get Red to leave but she tells her she is with her pack.  Red feels she found her home and she does not have to be afraid anymore or ashamed.  Red apologies to Snow – Snow tells her it is okay she will managed.  An arrow flies into the den and kills Quinn.  The Queen’s men have found them.

Back in Storybrooke Ruby tells Belle to leave, she is going to turn.  Belle refuses to leave – she tells Ruby that David can see the good in her and so can she.  Ruby just has to see it – Ruby hugs Belle and slips the cuffs and chains on Belle.  She tells Belle if the mob wants a wolf she is going to give them one.

Granny and David are searching they find in the trunk of a car ruby’s hood.  They realize someone stole her hood and killed Billy to make it look like Ruby did it.  David breaks into the car and finds the car belongs to Spencer, King George.  They hear the wolf howl.

Anita blames Snow for Quinn’s death – she believes Snow led the Queen’s men to them.  Anita tells the other wolfs to tie Snow to a pole and the wolfs will feast on her.  Anita then orders Red to kill Snow.  Red refuses and Anita says she will kill her.  Anita turns into a wolf and goes to attack Snow and Red throws a piece of medal into her mother and kills her.  Anita tells Red she chose Snow and Red tells her she chose herself because she is not a killer.

Spencer and the mob here the wolf howling – Spencer sees Ruby as the wolf and takes a gun to shoot her.  Granny takes threatens Spencer/King George and David tells the mob that it was Spencer and not her who killed Billie.

David takes the cape and throws it on the wolf and she turns to Ruby.  David turns around and Granny is on the floor and Spencer has gotten away.

In the fairytale that was, Snow and Red bury her mother Anita.  Red tells Snow she protected, Snow, her family, the only person who has accepted her for who she is.

Mary Margaret is sitting in the dark thinking and Emma comes to get her.  Meanwhile Aurora is having the dream about being locked in the burning room and Henry appears wearing the necklace that Mr. Gold gave her.  Aurora screams and Emma and Mary Margaret come running.

Aurora wakes up and tells Emma and Mary Margaret this time the dream was different, there was a little boy who stopped the fire and told her his name was Henry.  Emma and Margaret look on shocked.