BY Annemarie LeBlanc on November 4, 2012 | Comments: 5 comments
Related : Once Upon A Time, Reality TV, Recap, Television 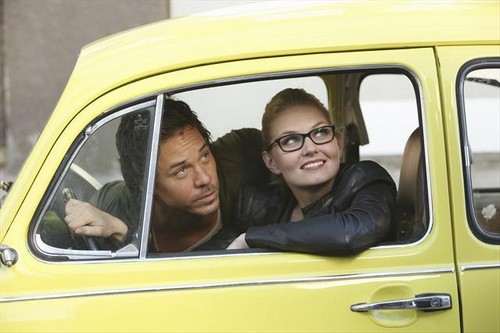 Tonight on ABC a whole new episode of ONCE UPON A TIME airs called “Tallahassee.” On tonight’s Emma treks up a beanstalk with a not-too-trustworthy Captain Hook to steal a compass from a murderous giant, and Emma’s past is reveled. Did you see last week’s episode? We did and we recapped it here for you!

On last week’s show while Regina continued to try and stop using her magic in an attempt to win back Henry’s affections, she began seeing what she believed was a ghost from her past; and when Mary Margaret and Emma discovered a lone survivor from an ogre massacre, Emma began to question whether or not he was telling the truth. Meanwhile, in the fairytale land that was, Regina found herself failing at learning the dark arts from a dark master because something from her past was preventing her from using her magic for evil.

On tonight’s show with the hopes of finding a magical compass that could help her and Mary Margaret get back to Storybrooke, Emma takes a journey with a not-too-trustworthy Captain Hook up a treacherous beanstalk in an attempt to steal the item from a murderous giant (Jorge Garcia, “Lost”). Meanwhile, Emma’s past is revealed to be anything but magical when she meets up with a fellow thief who wants to make an honest woman out of her.

Tonight’s episode 6 is going to be exciting, and you won’t want to miss it. So be sure to tune in for our live coverage of the season 2 episode 6 of Once Upon A Time — tonight at 7PM EST! (Yep we get it earlier here) While you wait for our recap, hit the comments and let us know what you thought of the premiere of Once Upon A Time last week! Catch a promo video and pics from tonight’s episode below! Don’t forget to come back at 7PM EST for our recap!

If they get the magic compass they can use the ashes from the wardrobe to open the portal to get back to Storybrooke.  Cora gave Hook something to get up the beanstalk but only one person can accompany him.  He asks who wants to go.

In current day, a much younger Emma Swan (I think it is a flashback to when she was younger) hot wires a car and Neil Cassidy is in the back of the car that she stole.  Neil asks if Emma wants to go for a drink.  They hear a siren and the police pull Emma over – Neil pretends she is his girlfriend and he is teaching her to drive stick.  The police gives her a warning.  Emma realizes that she stole a stolen car and the car does not belong to Neil.

In the fairytale that was Aurora, Emma and Snow fight about who goes with Hook.  Mulan takes Emma aside and gives her powder from a poppy that can knock out the giant if he breathes it in.  Emma makes Mulan promises she will get Mary Margaret home if she does not come back.

Hook and Emma head up the beanstalk. Hook tells Emma she will never forget her first beanstalk.

In current day Emma and Neil go into a store and Neil pretends to ask for directions as Emma steals items.  Someone walks him and sees Neil put something in his pocket and Emma who has a false pregnancy stomach pretends she is in labor.  Emma and Neil run out of the car and Emma shows him everything she took, Neil took a key chain for her.  They kiss – they head to a hotel.  It seems they actually know each other and Neil asks Emma if she wants to settle down.  Emma picks a place and they decided to go to Tallahassee to settle down.

In the fairytale that was Mulan tells Snow and Aurora they should take shifts sleeping.  Snow tries to talk Aurora into sleeping first and assures her she will be safe.  Meanwhile Hook and Emma are at the top of the beanstalk.  Emma has cut her hand and Hook pour rum on her hand and bandages.

Emma realizes after speaking to Hook that he wants Rumpelstiltskin dead not only for his hand but for stealing his love.

In current day, Neil finds a wanted sign in the post office.  Neil stole watches from a jewellery store and he is wanted for that.  Neil tells Emma he has to leave Tallahassee it is not safe for him.  Neil tells Emma he has to go to Canada.    Neil put the watches he stole in a safety deposit box and Emma offer to go get them for Neil so they can sell them and get new ID.  They both profess their love for each other.

Back in the fairytale that was Hook bangs something to wake up the giant.  Hook tries to get the giant to come after him, Emma throws the powder in his mouth and he passes out cold.  Hook tells Emma they make quite the team.

Aurora is sleeping and she is having a very bad dream and she wakes sobbing.  She had a dream she was in a red room with no windows or curtains and the curtains were on fire and she could not get out.  When she look over in the burning room she saw someone else who was looking at her.  Snow promises the nightmares will go away.  Snow tells her to go back to sleep she will take care of her.

Emma and Hook are in the giants room that is filled with gold and coins.  Emma wants to get the compass and go.

In current time Emma is a the train station and there are many police around.

In the fairytale that was they are looking for the compass.  Emma sees a trip wire she tells Hook she just wants to find the compass and go home and not touch anything else there.

Back in current time Emma brings the watches to Neil.  He tells her the watches are worth $20,000 each.  He tells Emma to go to the meeting place and he will meet her there and they can go to Tallahassee.  Neil gives her one watch and leaves with the rest.  Neil leaves and a man follows him.  The man jumps on Neil and tells him if he wants to protect Emma he should come with him.  Neil asks who he is and the man says August.

August tells Neil he is Emma’s guardian angel.  He has been looking for Emma for two years.  August tells Neil they were in the same home as kids and he promised to take care of her.  August realizes Neil loves Emma, August asks Neil to leave her, because Emma has a destiny and Neil will keep her from her destiny.

Meanwhile Emma is waiting for Neil – a police officer comes over and tells Emma she is arrested for theft.  The police officer claims that Neil called in and gave her up – he asks for the watch and then he cuffs her.

In the fairytale that was Emma and Hook continue to look through all the gold items for the compass.  They hear banging and realize the giant is up, as the giant runs in the ceiling starts to fall.  Emma stands frozen and the giant goes to grab for her.

Vancouver Canada 2 months earlier, Neil comes to see August.  Neil wants to talk to August about Emma, he could move on if he knows she is good.  August tells Neil, Emma got 11 months.  August tells Neil to steer clear and Emma can have a good life.  Neil makes August promise he will take care of Emma.  Neil gives August the car and money for Emma.  Neil tells August if things change send him a postcard.  (A couple of episodes ago we saw Neil and he had received a postcard, I wonder if August sent it)

He tells Emma he is letting her go because she did not kill him.  Emma tells him he wants 2 favors, she wants him to let Hook go too.  Emma goes to get Hook, Hook is happy she takes a chain and puts it around his wrist and locks him to the wall.  She tells Hook she needs a head start – she is not sure whether she trusts him.

11 years earlier from Storybrooke time.  Emma is in jail and the guard comes to tell her that someone sent her a car and she is pregnant.

In Storybrooke, Henry wakes up he had the worst nightmare ever.  Henry tells David is nightmare, it is the same nightmare that Aurora had about the red room on fire with someone watching him.  David tells him not to worry it is just a bad dream.