BY Annemarie LeBlanc on October 28, 2012 | Comments: 3 comments
Related : Once Upon A Time, Recap, Television 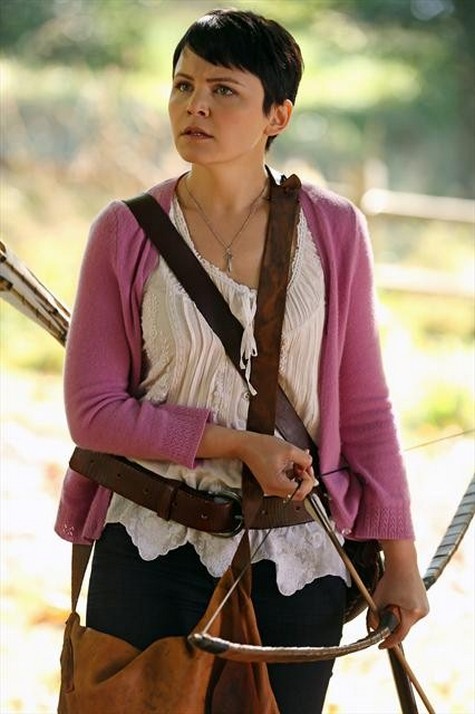 Tonight on ABC is an whole new episode of ONCE UPON A TIME airs called “The Doctor” On tonight’s show Regina believes she’s seen a ghost from he past in Storybrooke, Mary Margaret and Emma become suspicious of a lone survivor from an ogre massacre, and Regina finds herself failing at learning the dark arts from a dark master. Did you see last week’s episode? We did and we recapped it here for you!

On last week’s show Belle’s disgust over Mr. Gold’s continued thirst for power came to a head, and she threatened to leave him if he could not change his evil ways; the dwarves picked up their axes and tried to find fairy dust in the Storybrooke mine; and a reunion with an old acquaintance almost proved to be Belle’s undoing. Meanwhile, back in the fairytale land that was, Rumpelstiltskin attempted to save his wife, Milah, from being kidnapped by a band of cutthroat pirates.

On tonight’s show while Regina continues to try and stop using her magic in an attempt to win back Henry’s affections, she begins seeing what she believes is a ghost from her past; and when Mary Margaret and Emma discover a lone survivor from an ogre massacre, Emma begins to question whether or not he’s telling the truth. Meanwhile, in the fairytale land that was, Regina finds herself failing at learning the dark arts from a dark master because something from her past is preventing her from using her magic for evil.

Tonight’s episode 5 is going to be exciting, and you won’t want to miss it. So be sure to tune in for our live coverage of the season 2 episode 5 of Once Upon A Time — tonight at 7PM EST! (Yep we get it earlier here) While you wait for our recap, hit the comments and let us know what you thought of the  premiere of Once Upon A Time last week!  Catch a promo video and pics from tonight’s episode below!  Don’t forget to come back at 7PM EST for our recap!

Tonight’s recap: Tonight’s show opens in the Fairy Tale that was with  Mulan, Mary Margaret and Emma coming back to Mulan’s cap and the camp is on fire and everyone is killed.  Mulan cannot understand how the Ogres found them.  Mary Margaret tells Mulan it is Cora’s doing.  Emma founds someone trapped and he is still alive.

In Storybrooke Doctor Whale comes to see David and he punches him for sleeping with Snow White.  The doctor wants to know if it is true he is trying to build a portal to their old home, he wants to know if David is having any luck.  David tells him not yet.

Regina tells Dr. Hopper that she has been trying not to use magic and it has been two days and it is difficult.  Dr. Whale walks in he wants Regina to send him back to his brother.  Regina tells him she cannot do anything and Dr. Hopper kicks him out.  Dr. Hopper tells Regina if she wants help she has to trust him.

Back in the fairytale that was Rumpelstiltskin is training Regina his apprentice, he insists she take a heart from a Unicorn. Regina cannot do it because the unicorn is innocent and Rumpelstiltskin tells her nothing is innocent.  Rumple takes the heart out and then insists that Regina crushes the unicorn’s heart.  Rumple tells her until she can take power she cannot learn.  Magic is power.  Rumple asks her what is holding her back.

Regina leaves and is driving her car, it is raining and she sees Daniel in the middle of the road.

Regina goes to her secret vault and finds the glass casket where she had Daniel hidden empty.

In the fairytale that was Rumpelstiltskin is spinning on his spinning wheel and Regina is with him.  She wants Rumple to teach her to use magic to bring back the dead.  Rumple tells her magic can do much, but dead is dead.  Jackson shows up and says to Rumple that he thought nothing was beyond his reach.  Rumple wants Jackson to help him get to a land without magic and the Mad Hatter’s hat won’t do.

Rumple tells Regina to leave teaching her is a waste of time.  Jackson tells Regina that she needs to look elsewhere for her answer.  Jefferson tells Regina he knows a wizard who can help her.  He wants a Royal passport to traverse her kingdom as his price.  He tells Regina if the wizard cannot being someone back from the dead, no one can.

Mulan recognizes the one survivor, he is a blacksmith who lost his hand.  Mary Margaret does not trust it all because Cora has tricked them all before.

The blacksmith claims he hid under the bodies of the hearts of people Cora tore out.  Aurora wants to leave she is afraid Cora will come back.  Emma puts her knife to the blacksmith’s throat she does not believe his story.

Jefferson tells Regina she has to be careful around the Wizard he does not know their ways.  Jefferson introduces Regina to the wizard who prefers to be called the doctor.  He wants to see Daniel, Regina brings him to see him Daniel who she put a preservation spell on.  He tells Regina perhaps he can bring him back, because his condition is ideal.

In the fairytale that was the doctor/wizard tells Regina his operation is an experimental one.  He tells Regina he needs a heart a magic heart.  A heart that has been ripped out of a body while it is still beating.  Regina refuses to use magic for evil.  Regina tells them he knows exactly who can help them, she knows where to get a heart.

In Storybrooke Regina goes into Dr. Whale’s place and finds Doctor Whale on the ground.  She tells Dr. Whale she knows he took Daniel’s body and he took one of her hearts.   Dr. Whale is hurt and he tells Regina he brought back Daniel, but it is not Daniel, it is a monster.

In the fairytale that was Regina brings Jefferson and the wizards to her mother’s vault, you can hear the beating hearts.  They go down to the vault and there are many hearts, she tells them to take their pick.  Jefferson wants to know who the hearts belong to but Regina has no idea.  She tells them her mother was a monster and she took so many hearts and caused so much pain.

The wizard opens a box and sees a heart and says, “Finally after all this time, it is perfect!”

Regina tells him she thinks Daniel has gone to the stable.  David gasps, Henry is at the stables.  David and Regina run.  Henry is in the stables with his horse and all the horses gets upset suddenly.  Henry’s horse knocks him over, as he gets up he sees Daniel walk in.

Mulan ties the blacksmith to the tree, they are going to leave him.  The blacksmith finally admits who he is Dr. Hook.  Emma tells him to start talking or they are going to leave him with the Ogres to eat.  Hook admits that Cora wanted him to pump them for all the info he knows on Storybrooke.  Hook tells them they need him alive because he wants to go back to Storybrooke.  He tells them what Cora needs, an enchanted compass and he will help them find it instead of Cora.  Hook tells Emma he wants to get back to Storybrook to get revenge on Rumplestilskin for taking his hand.

Back in Storybrooke Henry tells Daniel to stop he is scaring the horses.  He picks Henry ups and strangles him, Regina walks in and screams and he drops Henry.  Regina goes to talk to Daniel and Daniel goes after her, David pushes him in the stable and tells Regina to leave he wants to shoot Daniel.  Regina begs him to let her talk to Daniel.  Regina believes she can calm him down.

In the fairytale that was, the wizard takes the heart and goes behind a curtain with the heart.  He tells Jefferson and Regina he can do what she wants.  Regina does not understand why he has to hide behind a curtain.  The wizard comes out and tells Regina he failed, the heart was not strong enough, Daniel could not withstand the procedure.

Regina goes to see Daniel and embraces him.

In Storybrooke Regina goes to see Daniel and she strangles him.  She tells him she loves him and he lets her go.  He recognizes her, he calls her Regina and he hugs her.  He starts having horrible pain, he begs Regina to stop the pain and let him go.  She refuses to let him go and the monster comes back.  She puts up her hand to stop him and uses magic to make him go.  She sobs goodbye Daniel!

In the fairytale that was the girls know that Hook is leading them into a trap.  Hook shows them where the compass is.  It is at the top of a beanstalk and he tells the ladies it is not the beanstalk they have to worry about, but the giant at the top.

Regina goes to see Rumpelstiltskin and she sees him with a women, Rumple tells her it is her replacement.  Regina reaches over and pulls the girls heart out.

Back in Storybrooke Regina heads over to Dr. Hopper and she tells him she used magic.

Jefferson and the wizard meet with Rumpelstiltskin.  It seems it was their plan to make Regina pull a heart out of someone.  The wizard is happy he got a magical heart as a payment.   Jefferson throws his hat and he and the wizard jump in.  Rumple tells them to be careful and remember everything comes with a price.

Dr. Whale  goes into Mr. Gold’s store with a cooler and he has an arm.  He tells Dr. Gold he wants him to reattach his arm.  Mr. Gold asks Dr. Whale why he brought the stable boy back to life.  Dr. Whale tells Mr. Gold he hope Regina would bring his brother back, but she could not.  Mr. Gold makes Dr. Whale say, he needs magic.  Dr. Gold says to Dr. Whale, always a pleasure doing business with you, Victor.

In the fairytale that was the wizard comes back to his lab and shows his assistant the beating heart.  He tells his assistant, it is the final piece of the puzzle.  We find out that the wizard is Doctor Victor Frankenstein and the magic heart worked and he brought his brother back, Frankenstein …