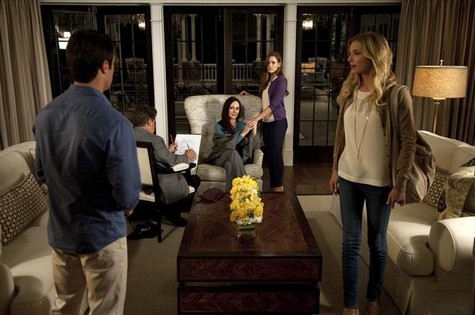 Tonight on ABC a whole new episode of Revenge airs called “Resurrection.” On tonight’s show things get complicated as Emily continues to delicately weave her way back into the Graysons’ lives while remaining tied to Amanda and her unborn child.  Did you watch last week’s premiere episode called “Destiny”? WE did and we recapped it here for you!

On last week’s premiere show it was filled with twist and turns and just like last season they gave us a flash-forward that predicted the death of an unknown character when Jack’s boat, the Amanda, sinks in three months time.  Victoria was presumed dead in a plane crash, Amanda returned and was pregnant with Jack’s baby, Daniel and Ashley seemed headed for a hookup, Charlotte ODs and Emily learned that her mother is alive.

On tonight’s show Victoria’s escape from death will be exposed, with Conrad and the rest of the family learning that she’s still alive.  Charlotte that will unknowingly help Emily put her plan for revenge into effect.  In order to take Charlotte away from Victoria, Emily decides to call up Daniel and let him know about the dirt she’s dug up on Charlotte’s rehab doctor.

After going for the paternity test, Jack and Amanda arrive back at the bar. She gets a text and tells Jack that Emily is taking her shopping for baby clothes.

Tonight’s  Revenge episode 2  is going to be exciting, and you won’t want to miss. So be sure to tune in for our live coverage of Revenge — tonight at 9PM EST! While you wait for our recap, hit the comments and let us know how excited you are about the new season of the Revenge?  Check out a Sneak peek of tonight’s episode below!

Tonight’s episode begins with Emily lost in a dream (or a flashback, you never can be sure) driving as a child alongside her mother. The old INXS song Never Tear Us Apart is cranked and Emily’s mom is belting it out as Emily stares at her. She sees a flash of Victoria before realizing that Nolan is shaking her awake on the couch.

Ashley seems bound and determined to land Daniel, at the very least for a hook up. As she’s being flirty and trying to tear him away from work to “play with some balls”, her attempt is interrupted by a call from Emily. Em tells Daniel that she thinks his sister’s shrink is on the shady side and plants the idea that Charlotte may not have gone back to those bad drug habits after all.

Last week Em planted a camera in Victoria’s hideout which has given her and Nolan a front seat view to what the not-so-dead Victoria is plotted. She is in cahoots’ with the white haired guy and she wants Emily to be her next casualty. He reminds her that he has nothing to lose and that she is an easy problem for him to take care of because people already think she’s dead.

Amanda turns up on Em’s doorstep to confront her about suggesting that Jack request a paternity test. She tells Emily that she loves Jack and that if Emily would just back off Jack might have a chance to love her too.

Ashley reports back to Conrad and tells him that Daniel was more concerned about the financials than her attempts at distraction. Conrad reassures her that there is no reason to worry about money. While they talk Daniel goes to get his sister out of the recovery center after realizing that she was clean and the doctor keeping her there had been hired to help bilk her inheritance money. Charlotte freaks out on Daniel for not believing in her in the first place. Em just so happens to show up as they argue and Charlotte asks Em to drive her to her mother, Victoria.  Emily tells her that she can stay with her but Charlotte says that she and her mother intend to leave the country.

Before Charlotte sees Victoria, Emily takes her to see the very pregnant Amanda. Charlotte can’t believe she’s going to be an aunt. Charlotte eventually visits Victoria and tells her she needs to stay until Amanda has the baby. Victoria flips out and tells her to leave and that she never intended to take her with her out of the country anyway. Emily thinks it’s for show because mothers don’t abandon their daughters so easily.

Out of the blue Conrad arrives at Victoria’s door and is only semi-stunned when she answers. She claims to be playing dead because he tried to kill her. Meanwhile Jack has in his hands the paternity test results. He waits for Amanda to open the envelope. Inside it confirms that Jack is the father of her unborn son. Emily calls and obviously had something to do with Amanda’s test results. Amanda asks her to say that the baby is really Jack’s and Em apologizes and tells her that she wishes she could.

Daniel decides to prove his loyalty to his sister and tells her that he transferred all of the inheritance money, his included into an account for Charlotte. It’s now safe from the hands of their father.

Victoria is proving herself to be as psycho as they come. The white haired guy walks in to find her handcuffed to a radiator, beaten and bloody. He asks who did it to her and she smiles and tells him that she did. She set everything up to look like he kidnapped her and he high tails it out the door as sirens begin blaring from all sides.

Victoria walks through the front door of the Grayson home and truly the only shocked one is Daniel. She is playing everyone. She tells Conrad she was abducted and Charlotte that the man who was supposed to help them turned so she had to create this ruse.  Charlotte tells Victoria that the only one who knows everything is Emily and she’s trustworthy. Emily comes to talk to Victoria and Daniel takes the opportunity to steal a moment alone with her. He thanks her for being such a good friend to him.

Emily leaves and gets a call from the white haired man who simply says she has something he needs. She tells him she has every frame of it.