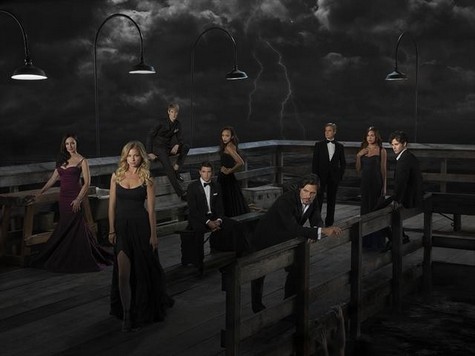 After it’s explosive finale last season Revenge returns tonight with the premiere of its second season called “Destiny.”   Revenge also moves to a new day and time , Sundays at 9PM. Tonight’s show picks up eight weeks later, at the start of the Hampton’s summer season.  Mike Kelly said about the premiere, “I will put the memorial in Memorial Days.”

Emily Thorne took the Hamptons by storm last summer as the intriguing new arrival to this exclusive community. By all appearances, she was a friendly and sophisticated “girl next door” whose disarming charm and generosity allowed her seamless access to the restricted circles of the Hamptons high society. However Emily Thorne was anything but what she seemed: Hiding behind an assumed identity, she was a woman with just one endgame – REVENGE.

This season Kelly promises answers about the fates of in-peril characters Lydia, Victoria and Charlotte.  Like last Fall’s the premiere will flash-forward to a “Dramatic and Terrifying” event that the first half of season 2 will work toward.  We can expect Amanda just weeks away from giving birth to the baby she claims is Jack’s; Nolan getting romantic with new NolCorp employy Padma; and Emily focusing on her training, a potential love interest, and locating her no-longer-presumed-dead mother.

In the wake of last summer’s events in the Hamptons and with the ante even higher, what will Emily’s next move be? Will she be able to manage her heart and keep her emotions from getting in the way of her resolve to avenge her father?

Tonight’s season premiere is going to be exciting, which you won’t want to miss. So be sure to tune in for our live coverage of of the season 2 premiere of Revenge — tonight at 9PM EST! While you wait for our recap, hit the comments and let us know how excited you are about the new season of the Revenge?

Season two kicks off with Emily tied with her hands behind her back to a tree branch intended to drown her. She keeps fighting to stay afloat until she finally surrenders to the water. As she starts to drown she flashes back to childhood. She is saved at the eleventh hour and forced to the shore.

Meanwhile Jack spent the night drinking heavily; probably to help deal with the fact that Amanda breezed back into town obviously pregnant with what is presumably his baby. He promises her that everything will work itself out and be fine but even I’m not buying that one.  Charlotte is supposedly doing fabulous in her in-patient recovery program and is trying to get released a bit early to attend an art show that honors her mother. In a totally unprofessional move, her doctor offers to accompany her.

Emily hooks up with Nolan and tells him that she remembered something. A hospital being shut down two days after her father was captured, she thinks it’s somehow connected to him and Nolan is on board for whatever she has in mind.

Forget grieving, Grayson is still taking shots at his son every chance he gets. He tells him that he intends to lift the restrictions on Daniel’s inheritance with the agreement being that Daniel must invest every penny in the family business. He needs to start showing loyalty, now says Grayson.

Emily and Nolan decide to visit the closed hospital and despite it being locked down for 20 years, the visitor log is still not only there, but intact. Victoria Grayson is one of the last visitors to sign in.

Emily stops in to visit Charlotte at rehab with flowers in hand. She is nixed by Charlotte’s doctor who is starting to appear a bit creepy. His investment in Charlotte is more than doctor-patient. Em then moves on to visit Amanda and when Jack interrupts their chat Em tells him she’s going to be the baby’s godmother. Amanda looks like she’ll fall through the floor at the idea.

At the art show that’s in memorial of Victoria, Emily flashes back to her special time last year with Daniel. She had sent a card that was intercepted by Ashley and the trio trade niceties until Nolan rescues Emily with a drink.

Amanda and Jack talk and she confides that she’s going to need stability once the baby comes. He tells her he’s moving back in so that they can be a real family. Deckland overhears and confronts Jack, encouraging him not to live a lie with Amanda.

Charlotte makes an honest speech at the show about her mother being a woman of many contradictions. Her doctor steps aside to take a call and just as she finishes he tells her that drugs showed up in her last hospital blood work and so back to the facility she must go. Charlotte absolutely freaks out screaming that her father arranged the fake results.

A-ha. Victoria is NOT dead but tucked away somewhere safe while the government builds a case against Grayson. Emily pays her a visit and tells her Charlotte has been locked up again. Victoria insists Grayson is using her counselor to try to ultimately get power of attorney over Charlotte’s inheritance. Of course she’s right because a phone call between the counselor and Grayson proves it. The counselor has Charlotte’s phone and intends to use calls from a blocked number to prove (falsely) that Charlotte is using a dealer.

Em tells Nolan about Victoria and says she wants to play a hunch and get a camera into her hiding place. As they are talking Jack knocks on the door. He and Emily talk and she asks the obvious question- is he sure he is the father of Amanda’s baby?

Em brings Victoria proof that Charlotte’s doctor is crooked and tells her that she’s glad to see she’s alive. Jack tells Amanda he needs to know for sure that her baby is really his and she offers to make an appointment.

Nolan managed to get the camera into Victoria’s place and they learn that she is in this with the white haired guy and they are now plotting to kill Emily! Tune in next week to our LIVE RECAP to see what happens next!