BY Dorothy Gale on May 23, 2012 | Comments: one comment
Related : Recap, Revenge, Television 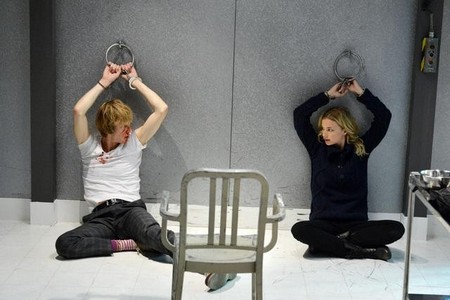 Tonight is the season finale of Revenge and they have had a very strong first season.  Tonight’s episode is called ‘Reckoning’, stand by as we live blog the episode with all the up-to-the-minute details.  Were you excited by the last episode?  Last week they led us to believe that Nolan was dead or at least in trouble when we saw someone choking him.  However, from the sneak peek photo above we can see Nolan is still alive.

On tonight’s finale, With the end in sight, Emily fearlessly pushes forward, closing in on the final phases of her plan for revenge, while the Graysons continue their downward spiral into the rabbit hole of self-destruction. But a big, explosive event leaves much hanging in the balance, courses are altered and even more is left in question.

Wonder if the event has something to do with Nolan being beat up and him and Emily being shackled to a wall.  Check out the photo from the finale episode and you can see their situation looks a bit dire.  Based on the synopsis of the finale,  it really seems like the season finale is going to be a cliffhanger!

We will be live blogging Revenge finale tonight with all the up-to-the-minute details at 10PM EST so make sure to come back to this spot and watch the show with us.  Refresh often to get the most up-to-date results!

RECAP: Emily goes to see Nolan and calls out to him but he’s not there. She goes into the living room and sees his computer and on it, she sees a note in the screen that reads “call my cell or I die”. Emily of course calls his cell right away and the note was actually on the front of a chair, in a live web cast and the man with the white hair kicks the chair and we see Nolan shackled to the wall.

Emily tells the man that Nolan is not the one he wants, she is. When he asks who she is, she says, “Amanda Clarke, you murdered my father, you and I have unfinished business.” He asks her how she wants to finish it and she says “face to face”.

Conrad walks in and he is furious with Victoria because the evidence she stole from him is now in the hands of their most powerful adversary, he has brought some muscle with them and given them carte blanche to search her place. Victoria tells him that if that monster has indeed resurfaced, he has his son to blame, not her. Conrad takes credit for their son being alive. Conrad’s guys have found microphones and he calls her stupid.

Meanwhile, Daniel calls Emily and tells her that he thinks they should back to the Hamptons and she says that he read her mind.

Emily arrives to find the man with the white hair, she has no wire, no phone, no weapon. She tells him that she has on her evidence compiled by Conrad Grayson implicating him and all his friends at the Initiative to fund and act out acts of terrorism on American soil. Then she demands that he take her to Nolan, he will but he wants her to knock herself out with chloroform or Nolan dies. He pretty much wants to make this secret, cause he doesn’t want to get caught.

Victoria has passed out and her mind is going back to when she was little and there was an injured bird on her doorstep. Victoria wakes up to find herself shacked beside Nolan. The man with the white hair wants to know where she has hidden the evidence and in return he will let Nolan live. She tells him the evidence is in a locker and she has the key, he is really surprised that she would tell him. Victoria also tells him that she has alerted the authorities and he has one hour.

The man has left, Victoria has a pick and gets herself out of the shackles, then she gets Nolan out of his. Emily tells Nolan that he has to deliver Grayson’s box of evidence to the feds and she gives him instructions. Nolan doesn’t want to leave Victoria, but she tells him he owes that to her. As Nolan is leaving, he tells Victoria to kicks ass and she tells him to tell Jack that she loves him.

Meanwhile, Declan is at school and there is girl trouble on the horizon – with Charlotte!

Porter goes to see Daniel and tells him he wants to live debt free and slips something into his pocket. Ashley walks up and tells Daniel that Porter is not a saint.

Charlotte goes into her mother’s office and calls a private detective, pretending to be her mom on the phone. She tells him that she needs everything he can find on a senior college prep who she believes is bullying her daughter.

Conrad is with Amber and tells her that he has to disappear for a while, maybe the Caymans and Lydia figures out that Victoria sold them out. Conrad has a gift for her, to thank her for her loyalty, it’s a ring and she is delighted and seals it with a kiss.

Mr. McGowan gets a text message from Nolan, the evidence is in his trunk. Meanwhile, Emily is waiting for the man to return with an axe in her hands. He returns and tells her that she made a big mistake, she tells him she is here for how her father died and takes a swing at him. The two go at it, smashing things and knocking the crap out of each other, but in the end, she’s got the axe to his neck chocking him and her childhood memories get in the way when she has flash backs of her and her father. She doesn’t kill him, but he is suffering and she walks out.

Victoria is with Mr. McGowan, he tells her that Lydia Davis has recounted her testimony but Victoria is not surprised. Although, he still has enough evidence for murder, it appears that Conrad didn’t just frame David Clark, he contracted to have him killed.

Emily finally arrives to see Daniel and tells him that she is banged up because she fell on the ice, but he knows she is keeping secrets. He asks her if Jack came by yesterday and wants to know if she kissed him. Emily tells him yes, so Daniel figures all these months have been fake only because she wanted the Grayson name. Emily tells him that she is not really the person that he fell in love and he’s changing too, he is becoming everything he never wanted to be, a Grayson. She takes off her ring and gives it to him, tells him she is sorry. Daniel leaves, says good bye.

Victoria thanks Daniel for turning over the evidence and he tells her it wasn’t him. She then says his father had Clarke murdered, Daniel thinks he had a good reason then Victoria slaps him in the face.

Emily is with Nolan and they are celebrating, she tells him there is only Jack left and she is going to tell him the truth.

Jack gets a call from Emily, she wants to meet him later. Emily and Nolan toast her dad.

At school, Charlotte’s plan to ruin Declan’s girlfriend comes true when everyone at school gets photos of her being romantic with one of the teachers, Declan is furious.

Victoria visits Emily who wants to give back the engagement gift. Emily opens the box to find it empty, because she knew that there future was empty just like the box.

Emily goes to see Jack and returns the collar, but he tells her that it belongs to Amanda and she walks in. Emily is shocked, she is pregnant and Amanda announces that she and Jack are going to have a baby.  Emily is upset and shocked, she leaves.

Daniel decides to have a drink and Ashley arrives and joins him. Meanwhile, Victoria is telling Charlotte that she is going to Washington. Victoria asks her if retribution ever made her feel good, she says yes, if the other person deserved it.

Conrad arrives at Vitoria’s house, he is drunk, she tells him that she knows what he did. The two get into an argument and he tells her that if she boards that plane it will be the last thing that she does, she says, then I will see you in hell.

Emily is alone, Nolan calls her and she tells him that Amanda is back and pregnant, Nolan is shocked and heading over there right now.

Lydia arrives at the jet and so does Vitoria, to head to Washington and we see the man with the grey hair under the plane, obviously he has planted something.

Conrad is still drinking and throwing pictures in the fire. Jack is happy with Amanda. Charlotte is really upset about what she did when she hears breaking news, when she hears that the jet that her mother was in exploded.

Emily also overhears the news. Charlotte has taken some pills and tries to kill herself, Conrad finds her, but is it enough time to sage her. Nolan walks in and Emily tells him everything was on that jet, he tells her not exactly, he made a copy and it’s on video. They watch the video together and Victoria is on the tape, Nolan tells Emily that basically her mother is alive. Emily wants to watch the rest of it.

The end! Wow, what did you think of the season finale, was it everything you expected it to be?