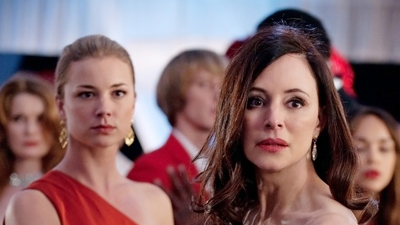 “Chaos,” the fifteenth episode of ABC’s Revenge, brings the series back to the events of the pilot episode, where Daniel (Joshua Bowman) is seen lying face-down on the beach. Or, is he?

After the box which Emily (Emily VanCamp) kept her scrapbook of revenge plans is stolen from underneath her floorboards, the show’s heroine spends the beginning of this episode frantically searching for it. She calls Amanda’s cell phone, but, surprisingly Tyler (Ashton Holmes) picks up the call!

Yes, Revenge‘s favorite villain is back, and he has not forgotten that Emily tried to frame him for the murder of Frank, the Grayson’s deceased security guard. To get back at Emily, he kidnaps Amanda (Margarita Levieva) and turns her against her friend by showing Amanda all of the text messages Jack (Nick Wechsler) sent that Emily hid from her.

However, sneaky Tyler offers Emily a “straight-up ransom deal” and makes plan to meet her in a parking garage to exchange money for Emily’s revenge box and Amanda. However, although Emily otherwise walks around, holding her gun throughout the episode, when she goes to confront Tyler, she puts it down long enough for Amanda to steal it from her and allow Tyler to get away with both Emily’s revenge box and the cashier’s check.

Meanwhile, back in Montauk, Jack receives an offer to do volunteer work in Haiti and decides he should go, especially as Declan (Connor Paolo) points out that it’s been a weird summer for him, full of heart-break and broken ribs. Before he takes off, though, he shows up at Emily’s house with Sammy, Emily’s childhood dog, and asks if she can take care of him while he’s gone.

Their sexual chemistry is so evident as they hug that even Nolan (Gabriel Mann), whose witty quips are too far and in between in this episode, picks up on it:

“Go with him. Fall in love. Make volunteer babies,” he urges Emily.

However, Emily has her hands full with her engagement party and, not to forget, the mentally unstable Tyler on the loose!

Like any good TV villain, Tyler announces his plans in advance to Amanda, who’s clearly wavering about betraying Emily: He’s going to kill Daniel with Emily’s gun, so that he can frame Emily for the murder, and it might have been a good plan had Amanda not managed to go running off. She shows up at Jack’s boat and promises that she’ll never leave him, before promptly leaving him. And, like a fool, Jack goes chasing after her again.

Back at the Grayson Mansion, the Fire and Ice engagement party is on and a pill-popping Charlotte Grayson (Christa B. Allen) is high, after stealing a bottle of Jack’s prescription oxycodone in his and Declan bathroom’s. Evidently, finding out that your biological dad is a convicted terrorist is a pretty hard truth to swallow.

Victoria (Madeleine Stowe) is also acting suspiciously too friendly to everyone at the party, especially to her ex-husband. She tells Conrad (Henry Czerny) that she’s agreed to his terms of the divorce, and he signs papers that she has sitting on her desk without even reading them! Why do we get the feeling that those weren’t actually divorce papers? Oh yeah, it must be Victoria’s devious smile and the business card that she fingers in a mysterious way right afterwards.

Meanwhile, Daniel is so over his family and comes up with a plan to run away to Paris with Emily. However, he springs the idea on her during the middle of the party and seems surprised that she says no. So, he walks away, sulking. This leaves him alone on the beach, giving Tyler the perfect opportunity to accost him.

Cut-away to Jack who has followed Amanda to the beach and is looking for her, when he hears gun shots! He finds Amanda hovering over a dead body in a tuxedo jacket. He tells Amanda to run and, for some reason, decides to drag the body further up the shore, but his plans get side-tracked when a skinny-dipping Charlotte and Declan hear the dead guy’s cell phone go off.

Back at the party, Victoria is giving a spectacular (although insincere) toast to Emily, when Charlotte bursts in, screaming Daniel’s name. This causes the entire Grayson family to go running towards the beach, but when they turn over the body, it’s not Daniel but Tyler who is dead! Daniel, in fact, comes stumbling out of the dark, looking dazed, with blood all over his shirt.

So, who shot Tyler? Was it Daniel? Or Amanda? Or could it have been a third character, like Emily’s Japanese mentor, who mysteriously showed back up during this episode and returned her revenge box? We guess we’ll have to wait until the next episode to find out.